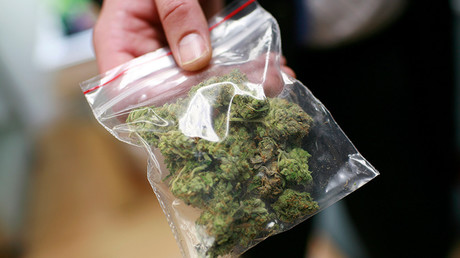 A New York blog review mom was surprised to discover something less family friendly than expected in a package from a California toy company – it contained 7 lbs of pot.

New York state resident Pamela Marks said she thought something was amiss when she opened the box from JAKKS Pacific, a California-based company that makes toy tie-ins for companies including Disney and Nintendo.

“First, I noticed it was two shoebox looking boxes wrapped in black plastic,” Marks told WNYT-TV. “What looked to me to be green foam vacuum sealed into a container.”

“I’ve never seen anything delivered like this,” she said. “So I took the sharp object and started slitting one of the plastic containers and a big woof of skunk smell came out at me and I was like I knew right then and there that I had the wrong thing.”

Marks contacted the Columbia County Sheriff’s Department who confirmed the package contained 7 pounds of marijuana. The police seized the cannabis and an investigation is underway. .

JAKKS Pacific said in a statement it was conducting its own investigation, KABC reported.

“The Company is taking this very seriously, and we are conducting an investigation to determine the facts behind this matter,” the statement read.

Marks has been writing her blog for two years, averaging 22,000 hits per month, and reviews a wide range of family-friendly products for her MarksvilleAndMe.com.

It is not the first time Mark’s got a surprise in the mail. She told WNYT she once ordered a honey sample and received a male aphrodisiac instead.

Marks estimated that she’s opened roughly 3,500 boxes from various companies who wants her to review their products.