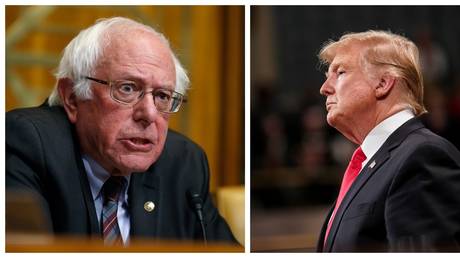 Lawmakers watching President Donald Trump’s State of the Union address were sharply divided along partisan lines until the president mentioned socialism – then they chanted “USA! USA!” as if McCarthy himself was watching.

Trump affirmed the US’ capitalist future – never really in doubt, except in the rhetoric of a handful of members of Congress – as the audience arose in a standing ovation, chanting “USA! USA!” in a joyful if vacant show of patriotism.

Trump raised the specter of Venezuela as an example of socialism’s pitfalls, smoothing over the part where crippling US sanctions and a deliberate debasing of the price of oil turned the once-wealthy nation into one of the continent’s poorest.

US #sanctions are responsible for the economic failures of most of America’s adversaries—that’s their point. You can’t purposely set out to ruin a nation’s economy and then blame ‘socialism’ for its decline. Shame on Congress for that round of applause for ‘abject poverty,’ too.

“America was founded on liberty and independence, not coercion, domination, and control,” Trump said, as the camera zoomed in on a peeved-looking Bernie Sanders. Coercion of other countries, of course, was still “on the table.”

Trump’s paean to capitalism was easily the biggest hit of the speech, sparking multiple standing ovations and two bouts of chanting. Twitter was less enthusiastic, however.

Some tried to school the president with a quick civics lesson,

From our public universities & libraries, to our public roads & bridges, to social security, the U.S. has long been a socialist democracy, not a province of King George III.

Our problem today – the public good – is being privatized by today’s King George III’s.#Socialism#SOTUpic.twitter.com/uIjesk3gFy

and pointed out that the word doesn’t quite mean what he thinks it means.

Others noted that socialism was near the bottom of the list of threats to the American way.

Socialism isn’t scary. What’s scary is that we’re going to die from climate change while capitalists hide in their caves of luxury. They knew climate change was real and hid it from us. Now we’re coming for them. #SOTUpic.twitter.com/nsKeiX1ZSD

I am just trying to understand, so socialism is the threat to our country but not white supremacy and white nationalism? #SOTU

And Trump’s defenders cheered, probably shouting “USA! USA!” from the comfort of their homes.

More than one person was reminded of the last time “socialism” played such an outsize role in US politics.

Two things #SOTU reaffirmed for me:

1) Democrats still clap for supporting right-wing governments in the ‘Middle-East’ and coups in Latin America.

2) Democrats are so scared of socialism they will gladly cheer a racist misogynist as long as he praises capitalism.

The more things change, the more they stay the same.

“This country has socialism for the rich, and rugged individualism for the poor.” – The Reverend Dr. Martin Luther King, Jr. #SOTU