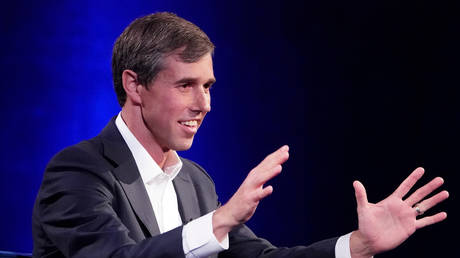 Beto O’Rourke, America’s favorite oversharing Senate candidate, is striding into the 2020 race with a glamorous photo shoot and a low-key text message – except his fanbase seems to have moved on to the next hot young thing.

Beto O’Rourke nearly stole Ted Cruz’s Senate seat during the 2018 midterms in a race that saw mainstream media lavish him with favorable coverage, running gushing stories on his band, his baseball team, even his tendency toward excessive sweating. While a win would have turned the Texas seat blue for the first time in 30 years – an accomplishment by any measure – the fawning media attention, and the millions of dollars in donations it spawned, should have given him the edge in wresting the seat from the charisma-challenged Republican incumbent’s grasp.


But if at first you don’t succeed, try, try again. Like Joe Biden – another also-ran touted as the Great White Hope for Democrats in 2020 – O’Rourke has been teasing his candidacy for months, giving interviews long on dime-store philosophy (“I think that’s the beauty of elections: You can’t hide from who you are“) and short on actual policy to Oprah and MSNBC’s Chris Hayes  following a brief period of soul-searching during which the media seemed to fall out of love with his tabula-rasa essence. A glamorous Annie Leibovitz Vanity Fair photo spread – actual tagline: “Man, I’m just born to be in it” – sealed the deal on Wednesday, and that same afternoon, he confirmed to El Paso, Texas station KTSM that he was, in fact, running.

Twitter was nonplussed, Beto-mania having apparently run its course during the midterms.

Beto’s coyness around running isn’t cute. It makes me less interested in giving him serious consideration. Run or do not. Playing games is… tacky and grating.

Many feared his appeal was irretrievably linked to the fact that he was running against Cruz.

I like Beto fine, but my donation to his campaign was 100% out of hatred for Ted Cruz.

Particularly when his “wokeness” is challenged by his record and by the fact that he did not bring in the Black and Brown voters necessary to win Texas.

As someone just pointed out in my DMs, so much of the amazement that accumulated around him was linked to HOLY SHIT, A DEMOCRAT IN TEXAS? Change the context to national field and that disappears

While no expense had apparently been spared for his Vanity Fair debut, he was thoroughly upstaged by his dog.

The magazine profile hammered O’Rourke’s “relatability” to the point of parody, inviting ridicule (He likes The Clash! He swears in front of his kids, then apologizes! He has, direct quote, “a healthy skepticism of the mainstream!“)

Ken Doll feels like the right nickname for Beto. Dude’s a plastic stand-in for the real thing

Its crazy how shallow Beto is considering his own belief in his deep wokeness. He tries on city council to ..condemn cheap housing and replace with Wal mart? He goes to Vietnam and sees a big crowd cheering obama and wants to be POTUS? JFC what a bunch of tired cliches.

Every single Beto piece is written by the same unemployed English major from NYU overlooking a Brooklyn alleyway in which a bum is pissing into a trash can https://t.co/Q2lnCOixvi

Journalists couldn’t decide which moderate centrist he reminded them of the most.

The last politician who came from “nowhere” to a major presidential campaign was Obama. The last top candidate who was “on this journey for his whole life” (read: groomed for years for the White House) was Al Gore. The centrist Dem script is so dull it can be easily replicated. https://t.co/UUJouTfF3m

the real contest for the obama nostalgia vote is between beto and biden imho; do you pick the guy who appears to most closely approximate obama’s bearing and demeanor OR the guy who, by nature of having breathed near obama a lot, has the highest no. of obama molecules in his body

And even the people hyping the Democrats’ latest boy wonder candidate seemed to feel a bit silly doing it.

Thanks to Beto’s savvy strategy of staying out of the race long enough for me to get bored with the other leading contenders I’m now feeling the Betomania that I found baffling back in December.

Beto O’Rourke is OFFICIALLY running for President. I like many of our candidates thus far, but THIS guy has that…something.

…but when you’ve already Instagrammed video of yourself at the dentist, where do you go from there?