The US practice of money bail amounts to racist debtor prisons, Senator Bernie Sanders (I-Vermont) is arguing. He has proposed a bill that would end cash bail in federal jails and put pressure on states to abolish it as well.

Requiring those arrested to post money bail as a guarantee of their appearance in court, or remain locked up before their trial, amounts to criminalizing poverty and is racist because it disproportionately affects minorities, Sanders wrote in the article published by NBC News on Friday.

Sanders argued that “people who can’t afford bail, and who thus spend 3 or 4 weeks in jail awaiting trial, are likely to lose their jobs and their income, they won’t be able to pay their rent and may find themselves homeless, and they may even lose custody of their children — all because they don’t have enough money to buy their way out of jail.”

To prove his point, Sanders cites government statistics from 2016, showing that on any given day some 65 percent of the roughly 700,000 people in county or city jails across the US were categorized as “unconvicted.” That, says Sanders, means that “more than 400,000 people were in jail who had not been convicted of a crime, often because they lack the money to pay bail.”

“In other words, we have criminalized poverty,” he said.

Sanders is especially sore that the US is “one of only two countries in the world that even allows for-profit bond companies,” outfits that will put up a bond for a defendant and charge a nonrefundable fee of anywhere from 10-15 percent for the service. The only other country that allows the practice is the Philippines, which was ruled by the US between 1898 and 1946. 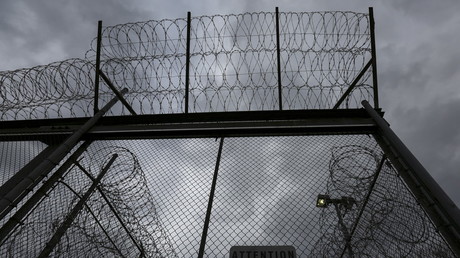 On Wednesday, the self-described democratic socialist introduced the No Money Bail Act, which would abolish the use of cash bail in federal courts. If states choose not to follow suit, the law would “revoke certain federal criminal justice funds the state currently receives,” Sanders wrote. Congressman Ted Lieu (D-California) has introduced a similar bill in the House of Representatives.

In addition to calling the bail system unfair and racist, Sanders argues it is also wasteful to the government. “It costs $75 a day to detain someone but only $7 to supervise them in the community,” he said in a statement announcing the bill.

How exactly are governments supposed to do that wasn’t exactly clear. The only example Sanders offered was a county in Oregon that used robo-calls to remind defendants to show up for their court dates. “The program wound up averaging a cost of just $550-$600 per month, and over a three-month span, only 2.7 percent of defendants failed to appear in court,” Sanders wrote in the NBC article.

Whatever alternate systems may be adopted to replace cash bail, Sanders’s bill would require a federal study after three years to show they are “not perpetuating the racial and ethnic discrimination we see now with the cash bail process.”

Oddly enough, Sanders does not make any references to the 8th Amendment to the US Constitution, which explicitly states that “Excessive bail shall not be required, nor excessive fines imposed, nor cruel and unusual punishments inflicted.”