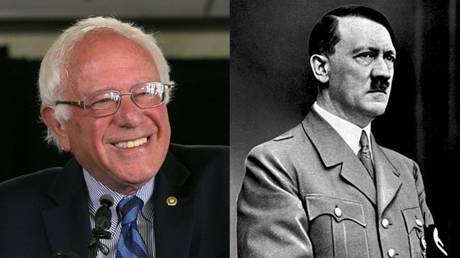 A Republican Party group has been forced to apologize after its comparison of Bernie Sanders and Adolf Hitler sparked cries of anti-Semitism and reminders that members of Sanders’ family were killed in the Holocaust.

The Clay County Republican Party of Minnesota Facebook page shared a post warning, “Those who do not learn from history are condemned to repeat its mistakes.” The post featured photos of Vermont Senator Sanders and Hitler and listed similar beliefs held by the two.

Earlier today we saw this post from the @mnGOP in Clay County, comparing Sen. Bernie Sanders to Hitler.

There are a LOT of reasons this is a ridiculous, spurious comparison, and even more reasons why its deeply offensive, and anti-Semitic. pic.twitter.com/jo93pq7FFc

These include: “calls himself a socialist,” (although Sanders is a democratic socialist) “proposes gun control,” and “promises a political revolution.” The most ridiculous comparison was that Sanders “blames rich for America’s problems,” just like Hitler, who “blamed Jews for Germany’s problems.” Unlike Hitler, Sanders doesn’t appear to have a plan to round up and murder all rich people just yet.

Curiously, the post appeared to miss the fact that, as a Jew, Sanders would not have done so well in Nazi Germany. Sanders’ own relatives on his father’s side died in the Holocaust.

Leave it to the “GOP” or as I call them The Devils Minions to take a great man like Sanders and compare him to a Dictator! Absolutely absurd. Seriously the GOP is now so desperate, they know that sooner rather then later, their time in power will be up! Tick Tock!

Republican Party in Minnesota who dragged @IlhanMN for accidentally hurting some Jews because they “care” about us, are now publishing content linking Hitler to Bernie Sanders. https://t.co/CyoOoqlv0G

The post was met with disgust online, with Jewish groups accusing the party of anti-Semitism. It was soon deleted and a statement was issued explaining it had been “shared by a volunteer.”

“Whether it’s the Democrats comparing Donald Trump to Hitler or Republicans comparing Bernie Sanders to Hitler, it is wrong, stupid, and inappropriate,” it said. “We sincerely apologize.”


Jewish Community Action accused the party of hypocrisy as its chair Jennifer Carnahan called for Minnesota Rep. Ilhan Omar to be stripped of her congressional duties over her alleged anti-Semitism just weeks before.

Finally, it’s particular appalling that not just a few weeks ago, we saw @mnGOP Chair @Jkcarnah call on Rep. Ilhan Omar to resign from Congress for a comment some felt touched on potentially anti-Semitic tropes.