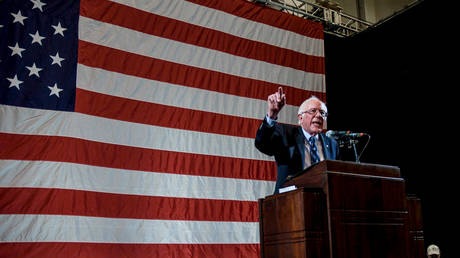 A whopping one million people have already signed up to support Bernie Sanders’ presidential campaign since the popular senator announced last week that he would take another shot at the White House in 2020.

After just one week of official campaigning, the Sanders campaign is shaping up to be a major political juggernaut. The Vermont senator announced last Wednesday that his campaign had raised a massive $6 million in the first 24 hours since he announced his second bid for the presidency — and now he’s giving his opponents even more to worry about.

In a video posted to Twitter on Monday, Sanders announced that one million volunteers had joined up across every congressional district in the country. Even more concerning for the other 2020 Democratic contenders, more than 324,000 of those sign-ups were new people who were not part of his 2016 campaign — proving that the senator is still able to attract new blood.

The astonishingly quick progress will likely come as a surprise to many on both sides of the political spectrum who had dismissed Sanders as an unfeasible candidate due to his age (77) and his more socialist ideals — a departure from the more centrist, corporate-friendly positions taken by the Democratic establishment.

When Sanders announced his campaign last week, he said he was looking for 1 million people to back him. His team just said he’s hit that mark.

But the number that other campaigns will notice: “The sign ons include…324,186 new people who were not part of Sanders’ 2016 campaign”

In 2016, Sanders’ massive grassroots movement shocked the media and political establishment and proved that there was real demand among Democrats for more left-wing and socialist policies. The self-described “democratic socialist” is largely credited with moving the Democratic party to the left on issues like ‘Medicare for All’ and free college tuition.

But Sanders narrowly lost the party nomination to Hillary Clinton after the Democratic National Committee (DNC) — a supposedly neutral body — was found to be actively working to favor the Clinton camp at his expense, convinced that she was the candidate that could beat Donald Trump, even as polls showed that Sanders had a better chance at beating then-candidate Trump.

Also on rt.com
He’s back: Will Sanders be able to make enough Americans ‘feel the Bern’ in 2020?


Sanders’ campaign has put fellow 2020 candidate Kamala Harris on the defensive, repeatedly having to answer questions about whether she is as “progressive” or a “socialist.”

The California senator, who is also seen as a strong contender among a crowded Democratic field, has said she is progressive, but has distanced herself from the “democratic socialist” label.