Statements made by Sergeant Bowe Bergdahl during his five-year captivity by the Taliban will not be used in his court-martial trial, the US Army has said. Bergdahl is facing charges of desertion.

“The government doesn’t have the intention to introduce” the statements, Army prosecutor Major Justin Oshana said during a preliminary hearing Tuesday at Fort Bragg, according to the Fayetteville Observer.

Bergdahl is accused of desertion for walking off a US military base in Afghanistan’s Paktika province in 2009. He was subsequently captured by the Taliban and held in Pakistan for nearly five years until May 2014, when the Obama administration agreed to exchange him for five men associated with the Taliban who were detained in in Guantanamo Bay, Cuba. 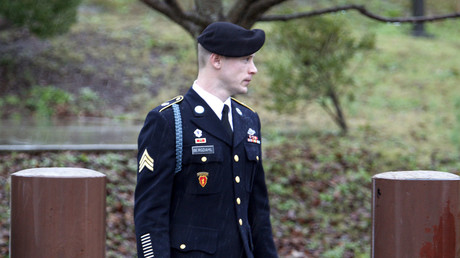 The prisoner exchange deal negotiated by the White House was criticized as “a terrible deal” by then-candidate Donald Trump during the 2016 election campaign.

Bergdahl was charged in December 2014 with desertion and misbehavior before the enemy by endangering the safety of a command, unit or place.

Last month, defense lawyers filed a motion asking Colonel Jeffery Nance, the military judge presiding over the trial, for Bergdahl’s comments to be suppressed. They said the statements were coerced, aren’t reliable and are unfairly prejudicial with little probative value, and made involuntarily.

“He was imprisoned entirely against his will, alone for 1,796 days, or nearly five years,” the lawyers said in the motion. “His conditions of captivity were characterized by torture, psychological torment, threats of execution and prolonged and intentional disregard for his well-being. Several of the statements that the government proposes to use against him were made under the orders of his captors, in which he faced threats of dire consequences for not cooperating.”

The rarely-used misbehavior before the enemy charge allows military authorities to claim that Bergdahl not only deserted his unit, but put them in harm’s way as they searched for him. It carries the possibility of a life sentence in prison, while a desertion conviction comes with a maximum five years in prison.

The charge of misbehavior is part of Article 99 of the military justice code (UCMJ), which includes nine different offenses such as cowardice or triggering a false alarm. Eugene Fidell, Bergdahl’s attorney, has said his client is being charged twice for the same action.

“It’s unfortunate that someone got creative in drafting the charge sheet and figured out two ways to charge the same thing,” Fidell said in March 2015.

Members of his battalion have claimed Bergdahl had talked openly about leaving the Army prior to his disappearance, and were convinced he had willingly deserted.

In recorded conversation with filmmaker Mark Boal for the podcast Serial, Bergdahl defended himself by saying he walked away from the base because he believed his Army leadership was putting his unit in danger.

Since his repatriation in June 2014, Bergdahl has been assigned to administrative duties at Fort Sam Houston in Texas. The next preliminary motion hearing is scheduled for September, and the trial begins in October.