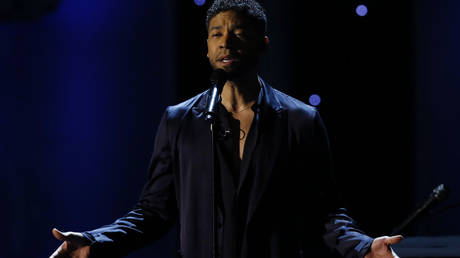 Two Nigerian brothers were arrested and then released this week in connection with the incident on January 29. Citing law enforcement sources, CNN reported on Saturday night that they are now “cooperating fully” with the investigation, in which Smollett has become the chief suspect.

Abimbola and Olabinjo Osundairo are two recurring extras on the set of the TV show ‘Empire,’ in which Smollett stars, and know him personally.

In the hours after the story was published, Smollett released a fresh statement, not just reiterating that he was a genuine casualty, but insisting that he is now being re-traumatized.

“As a victim of a hate crime who has cooperated with the police investigation, Jussie Smollett is angered and devastated by recent reports that the perpetrators are individuals he is familiar with,” said his legal team.

“He has now been further victimized by claims attributed to these alleged perpetrators that Jussie played a role in his own attack. Nothing is further from the truth and anyone claiming otherwise is lying.”

The lawyers added that the involvement of an unspecified Osundairo brother who Smollett had hired as a personal trainer to “ready him physically for a music video” was “impossible.” They added that their client has “no inclination to respond to ‘unnamed’ sources.”

According to Smollett, last month’s attack took place as he was returning home from a Subway sandwich shop at 2am. The actor, who is black and gay, was purportedly accosted by two white men, who called him “Empire fa**ot” and “Empire ni***r”. The men allegedly tied a noose around his neck and poured bleach on his head, as one of them shouted “This is MAGA country!” in reference to Donald Trump’s political slogan.

To those in Congress who don’t feel the urgency to pass our Anti-Lynching bill designating lynching as a federal hate crime– I urge you to pay attention. https://t.co/EwXFxl5f2m

.@JussieSmollett is one of the kindest, most gentle human beings I know. I’m praying for his quick recovery.

This was an attempted modern day lynching. No one should have to fear for their life because of their sexuality or color of their skin. We must confront this hate.

Democratic presidential candidate Kamala Harris called the incident “outrageous,” while another potential 2020 nominee Cory Booker immediately branded the incident a “modern-day lynching,” as part of a wave of sympathy and support for Smollett, who has a history of progressive activism.

Shut the hell up you bitch ass nigga. You will continue to run this country further into the ground and risk lives every time you breathe. You’re not the president. Just a dumpster full of hate. FOH. Sick to my stomach that literal shit currently represents America to the world. https://t.co/qoNWllmZIm

However, his account of the incident aroused almost immediate skepticism from some quarters, both official and general. Did two Empire-watching Donald Trump supporters happen to be randomly wandering through a deserted Chicago neighborhood when it was -14C outside, carrying a noose and chemicals, and then stumble upon Smollett? Or were they perhaps master stalkers, who could have predicted that the actor would have gone for a tuna sandwich and a salad – both of which remained intact after the attack – at this late hour?

Police also said that they didn’t manage to locate anyone matching the description provided by Smollett, despite studying hundreds of hours of footage from one of the most advanced CCTV systems in the world. Nor could they document the moment of the attack. Two silhouetted figures were identified in the vicinity, but their role remained unclear.

Doubts were compounded when Smollett refused to hand over his phone in the aftermath, and instead presented investigators with a PDF file purportedly showing a record of his calls, which detectives could not consider tamper-proof.

Reports over the last week that cited inside sources have put together a radically different account of events.

Smollett purportedly paid $3,500 to the black LGBT-supporting Osundairo brothers to buy a noose and bleach, and play-act the attack, inflicting superficial injuries. Police have found evidence of them buying the rope, while bleach was located during a search of one of their houses.


The Osundairos, who appear to be the shadowy figures in the surveillance footage, departed on a flight to Nigeria hours after the alleged incident, before being arrested the moment they touched down back in the US.

The details have resulted in much gloating online, not least from those claiming that because the story fitted a convenient political narrative, all attempts at critical analysis were abandoned.

It appears that Jussie Smollett tried to manufacture a hate crime to make Trump supporters look bad and most of the media not only uncritically accepted his lies as facts for weeks, but attacked those who questioned the validity of his false story.

They’re already talking about how @JussieSmollett can “redeem himself” and that he “shdnt be judged by this”…imagine reax if conservative had falsely accused liberal activists….

However, the story could result in more than just humiliation and career damage for Smollett, who may face up to three years in jail if he is found to have filed a false police report. It also brings attention to an earlier incident, in which police investigated a potential terrorist attack when the actor received an envelope containing white powder at his work address last month. The substance turned out to be ground-up aspirin.