The stage is set for a stormy 35th UK-France summit at the Sandhurst military base. Having dispensed with the formalities, Emmanuel Macron and Theresa May are expected to engage in an intense battle when talks get underway.

The two allies will meet at the Royal Military Academy in Sandhurst, Surrey Thursday.

May and Macron is expected to publicly praise each other for their trade success’ and strong alliance. However, cracks in the façade emerged this week as sources in France say Macron is ready to make demands, while those in London have hinted May will not be moved.

READ MORE: ‘We will not be blackmailed’: MEP demands May fight Macron on migrants & money (VIDEO)

Macron could threaten to tear up a 15-year border deal unless Britain takes hundreds more migrants and pledges more money.

One thing which can be guaranteed is Macron attempting to overhaul the Treaty of Le Touquet. He vowed during his election campaign to renegotiate the 2003 agreement. Under the accord, borders at sea ports in France and the UK are patrolled by each others’ police. Meaning, the border for the UK is in Calais, and the border for France in Dover.

However, since thousands of migrants became trapped in France while attempting to reach the UK, Macron’s camp have called for change. French politicians claim they are forced to police Britain’s borders and are enforcing the UK’s migration rules at a high cost.

Macron will now ask for more cash, a refurbishment of border control facilities and for the UK to accept hundreds more migrants. He will also insist the asylum process is sped up to kick migrants out of France and into the Britain. If the PM refuses, Macron could rip up the agreement altogether.

It’s believed he will offer support for the UK’s free trade agreement with the European Union (EU) in return. 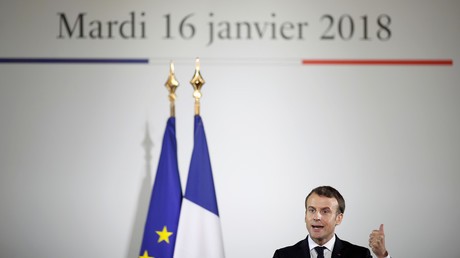 With love from Paris: The big Bayeux Tapestry bribe

France will attempt to sweeten a potential agreement with the UK by giving London something it wants. For centuries there has been a disagreement on where the Bayeux Tapestry belongs. The famous work, British scholars argue, was made in Kent, England. But France has not let it leave Normandy in 950 years, though Paris is preparing to loan the world famous work to London.

The tapestry, which depicts the Norman conquest of England after the Battle of Hastings in 1066, will reportedly travel across the Channel with Macron’s approval. An Elysee official said the loan was agreed in principle but would not take place for around five years, subject to a number of tests. The move will demonstrate – the leaders will claim – the strength of Anglo-French relations, while behind closed doors May will face a battle between giving in and gaining support and refusing and making a new Frenemy.

Defence will be a pivotal part of talks – especially given the apt military setting of Sandhurst.

Seven ministers or secretaries of state covering defence, interior, foreign and European affairs, Europe, culture, economy and ecology, is accompanying Macron, providing confirmation of the areas that France will want to explore.

French officials said Anglo-French ties “must not be weakened” by a deal made by the EU, describing Britain as a “vital” defence partner. However, The European Union is leaning towards an EU army, and Macron has backed such plans. It’s unclear how the UK could work alongside a separate fighting force on the continent after Brexit.

Paris said both countries would discuss “defence, intelligence and security… The pillar of bilateral relations.”