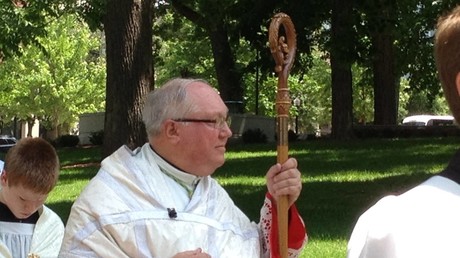 A controversial Catholic bishop has warned Thomas Aquinas College graduates that standing up for the teachings of the Catholic Church will require doing away with safe spaces and political correctness.

Bishop Robert C. Morlino of Madison, Wisconsin, told the graduates of the California college during the commencement ceremony earlier this month that they should dare to be “politically incorrect” and the “voice of reason” amid “the darkness of our world”. Morlino said that part of the problem with today’s world was that people had been “taught to be offended” by everything.

“People live to be offended. That’s why they need a ‘safe space’ and a ‘cry closet,’ and what they mean by that seems to be a space where they can be safe from hearing the voice of reason and truth,” he told graduates. “If you speak the truth, you might not be safe,” he added.

Morlino also told students that they should stand up for the Christian version of sex and marriage and recognize that artificial methods of birth control like contraceptives and sterilization are wrong in the eyes of the church, citing Humanae Vitae, the encyclical written by Pope Paul VI in 1968.

Contraception, he said, “frustrates the purpose of sexual union” which is “the procreation of children” and nothing else.  “That’s what it’s for; and that’s why contraception is wrong,” he said, decrying the fact that modern culture had made sex “all about pleasure.”

Morlino has been the subject of controversy in the past. A 2017 petition on Change.org asked Pope Francis to remove him  as the leader of the Madison diocese. The petition was launched in response to an advisory sent by the vicar general of the diocese, discouraging Catholic funerals for people in same-sex relationships and marriages. The advisory said the surviving partner should have no role in funeral rites because of the “the risk of scandal and confusion to others.”

The petition argued that Morlino had “corrosive and corrupt influence over the Diocese through his transparent attempts to influence the voting habits of its members.” It attracted more than 7,000 signatures.

In 2006, Morlino ordered all priests in his diocese to play a recorded message from him at mass services the weekend before state elections. In the recording, the bishop denounced same-sex marriage, stem-cell research and the death penalty and even threatened priests with “serious consequences” if they expressed any disagreement.

Morlino fired a long-term church employee in 2009, after she criticized the church’s male-only ordination doctrine in her master’s thesis. Three years later, the bishop banned two nuns and two other women from holding workshops at Catholic churches, saying they had strayed from the church’s teachings.