A 16-year-old boy gunned down on a basketball court was the 100th homicide of 2018 in Baltimore, Maryland. As the city struggles to maintain order, Mayor Catherine Pugh blames gun companies for the violence.

The teenager, who reportedly went by the name of Streetz or Jordan, was shot near a basketball court in the southwest of the city, according to WJZ Baltimore. Jordan had a pistol in his pocket and was apparently known to police.

Speaking to reporters after the murder, Mayor Pugh put the blame on guns and gun manufacturers.

When questioned about how to get guns off the street, Pugh replied: “Stop making them.”

However, if Pugh got her way, and all firearms manufacturing instantly stopped, there is little to suggest that the problem would instantly go away. Baltimore has rigorous gun laws, yet thousands of illegal firearms find their way into the hands of criminals, often from out of state.

Baltimore’s murder rate is 10 times higher than the national average and is the second-highest in the country. Of the 343 people killed in the city last year, 295 were killed with handguns and six were killed with shotguns or rifles, the vast majority of which were illegally owned, according to a police spokesman.

The basketball court Jordan was shot on is just blocks away from the crime-ridden Sandtown-Winchester neighborhood. Sandtown-Winchester was the home of Freddie Gray, who was arrested in 2015 and died after sustaining injuries in the back of a police van, prompting riots and protests across the city. The six officers involved in his arrest were charged with Gray’s homicide, but they were either found not guilty or had their charges dropped. 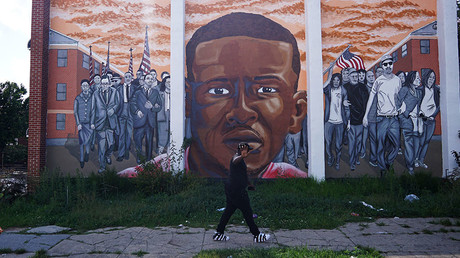 After Gray’s death, killings in Baltimore surged. Some blame the police for withdrawing from high-crime neighborhoods after the tragedy, as they were unwilling to aggressively enforce the law for fear of being labelled as racist.

David Simon, a former crime reporter for the Baltimore Sun and creator of HBO series The Wire, blamed the surge in murders on Baltimore State’s Attorney Marilyn Mosby’s charging of the six officers involved in Gray’s arrest. While Mosby was right to charge the officers with negligence, Simon argues that she was wrong to charge three of them for false arrest.

“What Mosby basically did was send a message to the Baltimore police department: ‘I’m going to put you in jail for making a bad arrest,” he told the Guardian. “So officers figured it out: ‘I can go to jail for making the wrong arrest, so I’m not getting out of my car to clear a corner,’ and that’s exactly what happened post-Freddie Gray.”

Pugh was one of the community leaders who sought to calm down the riots. She became mayor in 2016 after Stephanie Rawlings-Blake decided not to seek re-election. Pugh defeated 12 other Democrats in the race, including Mosby’s husband, Nick, and Black Lives Matter activist DeRay McKesson.

Arrest numbers declined after the high-profile trial, from 40,000 in 2014 to around 18,000 in the first 11 months of 2017. Simon also attributes the police’s failure to bring the murder rate under control to misguided “tough on crime” policies of the early 2000s that saw police occupy themselves locking up minor offenders while homicides continued to climb unchecked.

Mayor Pugh’s proposed 2019 budget would fund the hiring of an extra 100 police officers, and expand the anti-violence Safe Streets youth program, but with new homicides almost every day, it may not be enough to stem the tide of killing in Baltimore.