An airport baggage handler in Austin, Texas has been arrested after authorities said he stole handguns from checked luggage to trade for marijuana. Two men were also arrested in connection with the guns-for-pot scheme.

Ja’Quan Johnson, 25, was a contract baggage handler at Austin-Bergstrom International Airport, which “gave him access to the weapons that were inside of checked bags,” Lieutenant Joe Robles of the Austin Police Department’s Airport Unit told reporters.

The investigation began on November 29, after a passenger flew out of Austin with a handgun in his checked baggage. When he got to his destination, however, “his firearm was no longer there,” Robles said. On January 20, seven more handguns were “stolen in the exact same method.”

Austin PD’s airport and organized crime units ‒ along with the Transportation Security Administration’s Office of Law Enforcement and the FBI ‒ looked at airport records, employee badge swipes and schedules, and conducted surveillance to identify Johnson as the prime suspect.

On February 3, the organized crime unit served a narcotics search warrant on Johnson’s home. There, they arrested Matthew Bartlett, his 21-year-old roommate, for marijuana possession.

Authorities detained and interviewed Johnson the same day. Even though he “did confess to stealing the weapons from checked baggage,” he was later let go so that law enforcement could further investigate and gather enough evidence to file charges at the state and federal levels, Robles said. 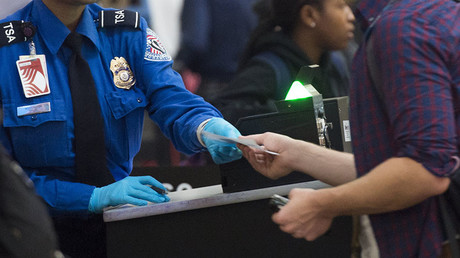 That further investigation led to the arrest of Catronn Hewitt, 36, one of the people Johnson had traded the guns to for marijuana.

Of the seven guns stolen from the airport, five were recovered, as were two others that were from separate cases, Robles said.

On Wednesday, Johnson turned himself into federal law enforcement. He was charged with theft from an interstate shipment and multiple counts of possession of stolen firearms. If convicted, he would face up to 10 years in jail.

The contracting company fired Johnson “almost immediately,” Robles said, but it was unclear if he was referring to after the interview or the arrest.

Johnson was released on a personal recognizance bond after a court appearance in front of a federal magistrate judge on Wednesday afternoon, the FBI said in a statement.