There is a lot to say about this day, when 72 years ago, the United States became the first and only nation to use nuclear weapons.

We did it twice (the Nagasaki bomb was on August 9) and we did it on two civilian targets. There is no use arguing that the two cities had significant military value; if there had been, they would have already been firebombed to tinder the way Tokyo and other cities in Japan had been. Nagasaki was a port, but not far away was the major naval base at Sasebo, which some say was not bombed because the U.S. planned to take possession of it after the war for our own navy (we did.) Both cities had some defense industry, but pretty much any place in Japan larger than a village also did.

Civilians were not, in today’s language, collateral damage. They were the targets. The image above shows what one child victim then looked like as an adult.

Please think of him when you hear some American say the Japs deserved it.

So we’ll leave it at this. As part of my research for my next book, Hooper’s War, I found this, below, an accounting by the United States of the exact, precise number of school children it killed on that hot August morning in 1945.

Peter Van Buren blew the whistle on State Department waste and mismanagement during Iraqi reconstruction in his first book, We Meant Well: How I Helped Lose the Battle for the Hearts and Minds of the Iraqi People. His latest book is Hooper’s War: A Novel of WWII Japan. Reprinted from the his blog with permission. 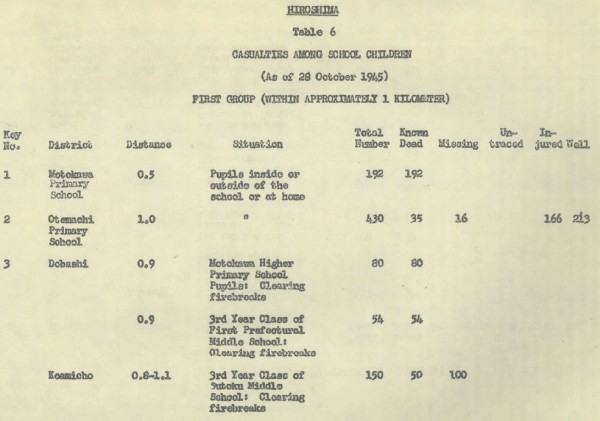