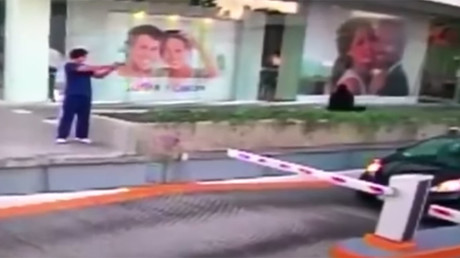 An attack on a US consular official in the western Mexico city of Guadalajara was caught on surveillance cameras. FBI offered a $20,000 reward for information on the attacker who is still at large.

CCTV footage of a gunman who shot and wounded the unnamed US consular employee have been posted on the US Consulate’s Facebook page.

One of the videos shows the moment of attack. The gunman awaits the official near the exit of an underground parking. When his car stops at a barrier, the attacker pulls out a gun and shoots a single bullet into windshield, apparently wounding the consular employee, and then runs away.

Another video captured moments before the attack, when the perpetrator, dressed in blue was following the US employee, dressed in a white tank top and red shorts. The US official is seen withdrawing cash from a terminal, while gunman followed him.

The third video shows the gunman fleeing the scene.

A manhunt for the gunman is reportedly underway. The consulate announced on Facebook that the FBI is offering a $20,000 reward for information leading to the identification of the attacker.