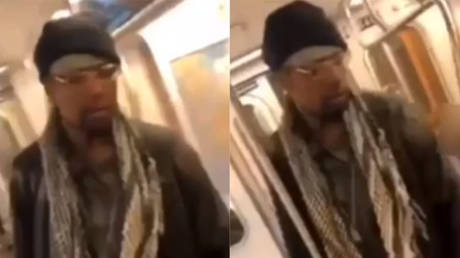 NYC police are looking for a man who was caught on camera brutally kicking an elderly woman sitting on a subway train, as bystanders filmed the shocking assault and did nothing to stop him.

The NYPD are asking for the public’s help to identify the attacker, who repeatedly kicked a 78-year-old woman in the head while she sat on a northbound No. 2 train in the early hours of March 10.


The defenseless woman was sitting alone on the subway and attempted to block the attacker’s ruthless assault by shielding her face as he landed repeated blows to her head and body.

As shown in the footage, the attacker casually exits the carriage at the next station, apparently without any passengers attempting to stop him.

Please help us bring justice to this 78-year-old woman who was brutally kicked in the face on 3/10 at 3:10 am inside the 238th St/Nereid Ave subway station in the Bronx. If you have any info, call @NYPDTips at 800-577-TIPS. Your calls are anonymous! pic.twitter.com/yf2TYjNm9D

We are aware of a video that has surfaced on various social media platforms showing an individual kicking a fellow subway rider in the Bronx. Our @NYPDDetectives are on the case and actively investigating this heinous assault. pic.twitter.com/nqVOUZqHA6

A bystander alerted an officer to the incident at that next stop, Wakefield Street Station, and the woman was treated by emergency medics for bleeding and swelling from cuts to her face, but refused any further treatment.

The horrifying footage has led to a social media campaign to identify the perpetrator.