A leak in the Keystone Pipeline released at least 210,000 gallons of oil, and the pipeline has since been shut off. The leak is now covered, according to TransCanada, the sole owner of the pipeline.

The leak occurred on Thursday morning in an agricultural area in Marshall County, South Dakota. The oil has not entered any waterways or water systems, KSFY reported. 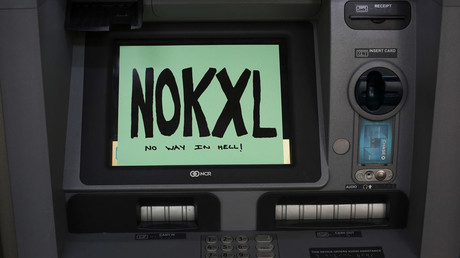 Crews are now working to clean up the leak, and an emergency response plan has been activated to get more staff and contractors to the site.

TransCanada released a statement in response to the leak on Thursday.

The Alberta-based North American energy company said its “crews safely shut down its Keystone pipeline at approximately 6 a.m. CST (5 a.m. MST) after a drop in pressure was detected in its operating system resulting from an oil leak that is under investigation. The estimated volume of the leak is approximately 5,000 barrels.“

The company said the section of the pipe that leaked “was completely isolated within 15 minutes and emergency response procedures were activated.”

TransCanada added that it “is providing State and Federal regulators, including the Pipelines and Hazardous Materials Safety Administration (PHMSA) and the National Response Center (NRC), with accurate and confirmed information on an ongoing basis,” in relation to clean-up efforts.

Brian Walsh, who works with South Dakota’s Department of Environment and Natural Resources, told KSFY his agency was alerted to the leak at 10:30 am Thursday morning by TransCanada. Walsh stated that 5,000 gallons of oil have leaked, and at 42 gallons a barrel, that comes to a total of 210,000 gallons.

In August, Native American activists led hundreds of protesters in opposition to the Keystone XL Pipeline in Lincoln, Nebraska. The protest was in response to public hearings that were being held about construction of the controversial project in their state. The protesters argued that potential spills from the pipeline would pollute their water and soil.

Earlier this year, President Donald Trump signed an executive order shortly after assuming office which gave permission for the pipeline to be built. Trump also gave a greenlight to the controversial Dakota Access pipeline, which has faced similar backlash from environmental activists in the US.

The 1,719-mile Keystone Pipeline is intended to transport nearly 830,000 barrels of oil per day from Alberta, Canada’s tar sands, to a transfer terminal in Nebraska. It was originally commissioned in 2010, but was canceled by the administration of former President Barack Obama in 2015, following pressure from activists.