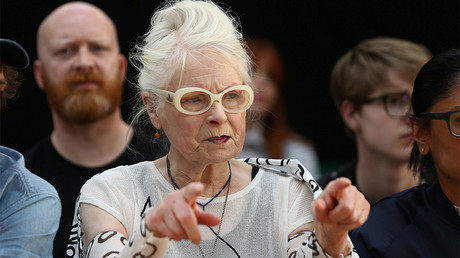 Fashion icon Vivienne Westwood sent a message of support on RT to her friend Julian Assange, whose Internet access was cut off by the Ecuadorian Embassy in the UK, calling him a “hero” and a “brilliant” man.

Westwood hailed Julian Assange on RT after being asked why she decided to come to the Ecuadorian Embassy. Holding what appears to be a UK passport, Westwood said she wanted to make a statement on freedom of speech.

“Julian Assange is one of the greatest heroes of the world, we are very concerned now that he can’t have visitors,” she said. “It’s really important that he’s got access to the world by all the exposures he has managed to do.”

According to Westwood, Assange was “a war hero, he exposed American war crimes.” The founder of WikiLeaks “is my friend and he is brilliant,” she said.

On Wednesday, the Ecuadorian embassy in London, where Assange is holed up, blocked internet access for the whistleblower. Assange’s remarks on Catalan politics, in which he equated Spanish extradition requests to fascist policies, raised the ire of Ecuador.

Sources close to WikiLeaks told RT that the Ecuadorian Foreign Ministry demanded that Assange delete the tweet, which he refused to do. He has consequently been stripped of internet access and no longer allowed to meet visitors in the embassy.

This week, Assange lambasted Berlin for its decision to arrest fugitive Catalan independence movement leader Carles Puigdemont, who is wanted by the Spanish government on charges of rebellion and sedition.

Assange compared the decision to the one made by Nazi Germany when it arrested Catalan leader Lluis Companys and handed him over to the regime of Spanish dictator Francisco Franco.

The embassy reportedly installed electronic jammers to block all communications on its premises hours after an individual representing Assange’s interests was informed of “strong discomfort and concern that his declarations have caused in Ecuador’s government,” the source told RT.