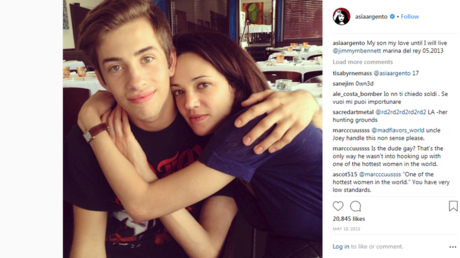 Asia Argento’s Instagram account has revealed that the actress referred to child star Jimmy Bennett – who reported received hush money from Argento after being sexually assaulted by her when he was 17 – as “my son” and “my love.”

The actress had apparently formed a close relationship with Bennett after the two co-starred in the 2004 film “The Heart Is Deceitful Above All Things.” At the time, Bennett was only 7 years old, and played the son of Argento’s character. A deep dive on their social media posts has revealed that the two referred to each other as “mom” and “son.”

In an Instagram post that did not age particularly well, the Italian star wrote on the day of the alleged assault: “Waiting for my long lost son my love @jimmymbennett in trepidation #Marinadelrey smoking cigarettes like there was no next week.”

Later that day, Argento shared a photo of her with Bennett, describing their reunion as the “happiest day of my life.”

Argento became a leading figure of the #MeToo movement after accusing movie producer Harvey Weinstein of rape, but now finds herself at the center of her own sex scandal. Citing court documents, the New York Times reported that the actress paid around $380,000 to Bennett to prevent him from suing her or disclosing the photos of their encounter in 2013 in a California hotel room.