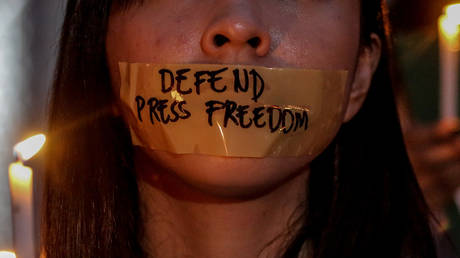 The US has been calling for regime change in Venezuela for months. In that time, US officials have been caught skewing the facts on the ground and pushing disinformation to the media — but the real bad guy? RT, of course.

That’s according to US Secretary of State Mike Pompeo who spoke to the media on Monday to give “an update” on the situation in Venezuela.

Nevermind that the US has declared its support for unelected opposition leader Juan Guaido and repeatedly called for the overthrow of current President Nicolas Maduro, who is supported by millions of citizens. In Pompeo’s curious interpretation, it is not Washington’s thwarting of international law and attempts to engineer a military coup in full view of the world that is the problem, it is Russia that “has created this crisis” by providing “political cover” to Maduro and pressuring other countries to “disregard the democratic legitimacy” of Guaido — who was, by the way, never actually elected by anyone.


For failing to adhere to the Washington-approved narrative, Pompeo branded RT a “disinformation organ” — an ironic definition considering it is US officials that have been caught outright lying about events in Venezuela since the Trump administration declared support for Guaido in January.

In one case, US and Colombian officials were caught lying about how one of the aid trucks attempting to illegally cross the Venezuelan border last month was set alight. National Security Advisor John Bolton accused “masked thugs” sent by Maduro of torching the aid crates, even as video evidence proved that it was in fact opposition protesters hurling Molotov cocktails at the police which started the fire.

Masked thugs, civilians killed by live rounds, and the burning of trucks carrying badly-needed food and medicine. This has been Maduro’s response to peaceful efforts to help Venezuelans. Countries that still recognize Maduro should take note of what they are endorsing. pic.twitter.com/KlSebd2M5a

Independent journalists and RT reporters questioned the claims and reported on the footage showing what had actually happened, rather than what had happened in Bolton’s vivid imagination, but major US media ignored the video and instantly parroted the Maduro “thugs” line instead. It was only when the New York Times “investigated” and found what others had known weeks before, that it became acceptable to speak that particular truth.

In another instance, US officials, including Pompeo, spread a photograph of a blocked-off bridge connecting Colombia and Venezuela, claiming that Maduro had blocked the route to keep out humanitarian aid.

The Venezuelan people desperately need humanitarian aid. The U.S. & other countries are trying to help, but #Venezuela’s military under Maduro’s orders is blocking aid with trucks and shipping tankers. The Maduro regime must LET THE AID REACH THE STARVING PEOPLE. #EstamosUnidosVEpic.twitter.com/L4ysYJaM6H

The bridge in question, however, had never been open to traffic, but US media dutifully reported the false claim from officials anyway. Canadian channel CBC was one of the only major outlets that clarified the facts when the lie had been exposed.


Most US mainstream media has uncritically accepted Pompeo’s version of events in Venezuela, while RT has not, which might have a little something to do with why he isn’t a big fan. Maybe, just maybe, he doesn’t want people to hear the other side of the story?

In light of emerging facts and evidence, who has really been responsible for spreading “disinformation” about Venezuela?

Well, we’ll leave it to you to decide.