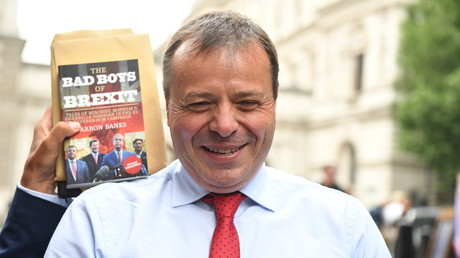 Arron Banks, founder of Leave.EU, has baffled observers after claiming he will with withdraw from politics because the job of following through with Brexit – for which he campaigned – is too “tedious.”

Banks, one of former UKIP leader Nigel Farage’s closest allies, donated £1 million ($1.3 million) to the Euroskeptic party. He told The Guardian on Wednesday that he and his fellow Leave campaigners feel “exhausted.”

“From our point of view, the referendum stuff is slowly grinding towards a conclusion in the most painful horrible way,” he said. “We’re a bit exhausted.”

The tired millionaire soon became subject of widespread criticism on Twitter, with some blasting him for thinking that Brexit is just a “laugh.”

For the Brexit multi-millionaire elite it was just a laugh: “Arron Banks says Brexit is exhausting and may leave politics” https://t.co/PSGox6tuKh

Another sarcastically said Banks’ withdrawal would be a “good riddance,” before other Twitterati suggested he is shrugging off responsibility for the current Brexit havoc.

Whatever happened to the Bulldog spirit? The dogged determination that makes Britain great? Turns out Banks is a wimp.

Should that read quietly diddles away to avoid taking any responsibility?

Shut the door on your way out.

Banks’ declaration came after he was questioned by the Digital, Culture, Media and Sport Select Committee, which is chaired by Tory MP Damian Collins, over his alleged contact with Russian officials, amid suspicion they were used by the Kremlin to influence Brexit – a claim denied by Moscow.

The former UKIP donor, however, dismissed all such allegations.

Giving evidence alongside the former Leave.EU spokesperson Andy Wigmore to the so-called Fake News committee, Banks suggested that had it not been for the current “witch-hunt” against Russia, there would not have been such suspicion over some his contacts.

In what was bound to leave the MPs red-faced, Banks and Wigmore then made the unexpected admission they had also told US security services based at the American embassy in London all about the meetings with the Russian officials, and offered MPs the email correspondence to prove it. They were reportedly advised to inform the US security services by the former chief of staff to prime minister David Cameron.