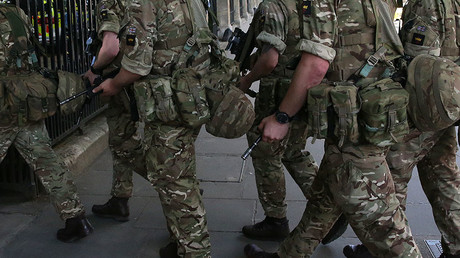 Army vehicles have entered a North Dorset town reportedly to remove a truck linked to the poisoning of ex-double agent Sergei Skripal. Locals described the sight as “astonishing.”

A section of Hyde Road in Gillingham has been cordoned off by Dorset Police as a special army unit moves in to investigate the truck, believed to have been involved in the removal of Skripal’s red BMW. The town is reportedly on lockdown, with residents being told “not to leave their homes,” according to the Mirror.

Images on social media show the truck being covered with a protective sheet before being removed. The vehicle in question is thought to have been involved in the removal of the former spy’s car following his poisoning. The vehicle was left at Sainsbury’s car park in Salisbury at around 1.40pm on Sunday, March 4, the day he was allegedly poisoned.

Residents said the vehicle has been parked in the road for the last two days and they are worried they could have been exposed to health risks.

Resident Mike Tolman, 73, told Somerset Live he had concerns the van had been contaminated by the military-grade nerve agent that left the ex-Russian double agent and his daughter, Yulia, in critical condition.

Gillingham’s MP took the Prime Minister’s Questions on Wednesday as a chance to inquire about the military operation in his council.

I have just raised this with the PM during her statement in the Commons I will have a full briefing later today.
Government committed to keeping us all safe. Thoughts with my Gillingham residents today https://t.co/Iy8F2thJjX

A Met police spokesman said: “The military is assisting police to remove a number of vehicles and items from areas of Dorset, following the incident in Salisbury.

“The public should not be alarmed and the public health advice remains the same. The military has the expertise and capability to respond to a range of contingencies. The Ministry of Defence regularly assists the emergency services and local authorities in the UK. Military assistance will continue as necessary during this investigation.”

Gillingham Mayor Belinda Ridout said: “We’ll give the police all the assistance they need. Obviously people will wonder what’s going on and it’s a bit close to home but everything has to be followed up with something like this. We want everyone to be safe and that’s what we’d expect from the police.”