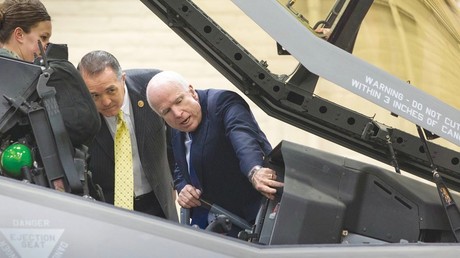 It’s rare for a military contractor to go out of its way to highlight ties to elected officials, but US defense manufacturer Lockheed Martin wrote a most heartfelt eulogy to the late John McCain. Its sentiment was not appreciated.

On Sunday, a day after the American politician’s death, the Maryland-based company took to its Twitter to call the long-serving Arizona senator “an exceptionally courageous leader and a true patriot.”

But, with the combination of McCain’s reputation as a fierce advocate of US foreign intervention and Lockheed’s line of work, this was never likely to attract the say-something-nice-or-nothing-at-all crowd.

I would like to express my condolences to the loved ones of John McCain’s victims.

If I’m lovingly memorialized by a massive defense contractor upon my death, you have my permission to spit on my corpse and throw it to a pack of wild dogs. This is worse than NAMBLA sending flowers.

I can’t read this statement it’s covered in blood.

Particular offense was taken at the portrayal of McCain arguing with the corporation for every dollar on behalf of the US citizens.

‘The taxpayers’ interests were properly served.’ Indeed they were! Thanks to the war machine, your country is now, for all practical purposed, bankrupt. Good going👍

Though some thought there was something admirable about the frankness of the whole thing.

The only credibly honest obituary I read so far.

Others thought a rewrite was in order.

John McCain served us well by calling and voting for war at every opportunity that presented itself. He was a boon for our stock prices and corporate profits by ensuring our bombs and military equipment would be used on innocent civilians across the world. RIP – Lockheed Martin https://t.co/3JU5KGxbsM

Several were worried for Lockheed, which recorded revenues of over $50 billion last year, now that their ally, who played a key role in lobbying for the F-35, is gone, and speculated about a replacement.

Fear not..there’s always Bolton in the wings. You’ll have your wars since war is the new Gold Standard..

I wonder which politician @LockheedMartin is going to select to shovel cash towards to be the next top war whore now #McCain is gone? @RepAdamSchiff would be a fantastic one. He already takes a lot of cash from Lockheed, supports military spending and endless wars.

But for most part people thought that Lockheed’s grief would give way to happier times.

dear Lockheed, don’t worry, his constituents will vote in another war mongerer, you will continue to get all the war you can handle.