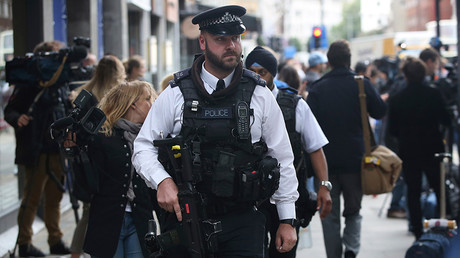 Armed cops deployed to major train stations in London could use the tube to travel between jobs in a move police chiefs hope will reassure the public.

The British Transport Police (BTP) denied they are deploying US-style ‘marshalls’ on the Underground, but instead said the armed officers could use the tube instead of cars to get around the city.

The London Mayor’s office said a decision will be made on the proposal in “the coming weeks.”

“They will stand out and people will see them. We hope they will provide a reassurance that they are there and they are able to respond whatever the threat may be,” BTP deputy chief constable Adrian Hanstock told the Evening Standard.

The Mayor’s spokesperson said, however, “no decision has been taken on this proposal. It will be discussed between the Mayor, BTP and [Transport for London] over the coming weeks‎.”

Armed police were deployed temporarily on the tube and railway after the 7/7 bombings in 2005.

Hanstock admitted that the sight of armed officers on the Underground could increase fears of a terrorist attack.

“It is a risk we are prepared to take. We understand that people don’t want to be confronted with the reality of the threat that the UK faces but it is clear and obvious that we have this severe threat level from terrorism,” he said.

“Whether that is targeted, deliberate and calculated or whether it is unsophisticated, we have seen both, the reality of that risk is there.

“Hopefully people will be reassured that we have got the measures in place to counter that threat and we can also be unpredictable.”

University student Damon Smith, 19, was arrested on Friday near Holloway Road in London in connection with the alleged bomb plot.

Officers say he was arrested on suspicion of the commission, preparation, and instigation of terrorist acts, under Section 41 of the Terrorism Act 2000.