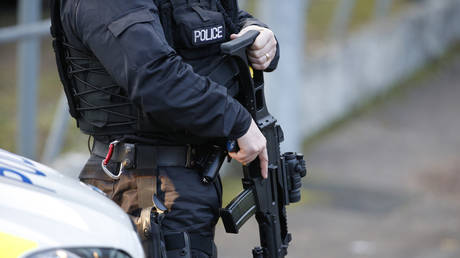 A man has been arrested after armed response units were called to reports of a person carrying a large sword at Dartford train station in Kent, England.

Video footage shared on social media that appears to have been taken at the scene shows a man being escorted out of the station by a number of officers, one of whom appears to be holding a samurai sword-like blade in a sheath.

British Transport Police said officers were called to the station just before 12:45pm on Friday after receiving reports of a man in possession of “a large knife.”

A 23-year-old man was detained on the platform and arrested on suspicion of possession of an offensive weapon.

“This incident is not currently believed to be terror related,” police said. Officers took out a taser during the arrest, but it was not used, according to a police statement on the incident. No injuries were reported.

Eyewitness Billy Pryor was waiting for a train on the platform at 12:55pm when police suddenly arrived at the station and moved everyone away.

“We ran over to the other platform and many police ran towards the train to stop it,” Pryor told RT. It took about 40 minutes for officers to arrest the man and escort him out of the station.

Pryor was unable to see what was happening during the police operation, but didn’t hear any shouting “so I assume he surrendered,” he said.

Kent Online reports the man is believed to have gotten on a train at Greenhithe, the station before Dartford on the southeastern line towards London Victoria.