Over two hundred members of the Arizona National Guard are en route to the Mexican border to support President Donald Trump’s clampdown on illegal immigration and drug trafficking.

Defense Secretary James Mattis authorized the deployment of up to 4,000 troops to the border last Friday, following an executive order from President Trump. The troops will be under the command of state governors, but will be paid for with federal money until September.

More Arizona National Guard troops will follow on Tuesday, the state’s Republican governor Doug Ducey said on Monday. The troops will be stationed near Tucson and Yuma, and will assist federal border control personnel.

Texas governor Greg Abbott (R) was the first to take action, sending two helicopters full of troops south from Austin on Friday night, with more to follow this week. New Mexico will also send troops, but governor Susana Martinez (R) has not yet indicated when.

It is still unsure whether California will send troops. Governor Jerry Brown, a Democrat, is a vocal critic of Trump, and has refused to deploy the National Guard before, in 2014.

Once at the border, National Guard members will not perform law enforcement roles, or “interact with migrants or other persons detained” without Mattis’s approval, according to a Department of Defense memo. Instead, they will “provide air support, reconnaissance support, operational support, construction of border infrastructure and logistical support,” according to a spokesman for the Arizona Department of Emergency & Military Affairs.

The troops will not be armed, save for in “circumstances that might require self defense.” 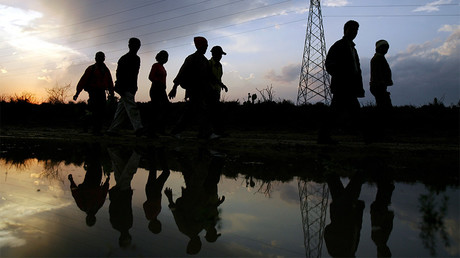 Stamping out illegal immigration had been a core promise of the Trump campaign, as was stemming the flow of drugs across the border. Most of the illicit drugs that enter the US do so through the 2,000-mile border with Mexico. Mexican drug cartels make an estimated $19-29 billion a year on drug sales in the United States – enough to comfortably fund the first phase of Trump’s proposed border wall.

Both operations were responsible for apprehending over 200,000 illegal immigrants and seizing over 28 tons of marijuana.