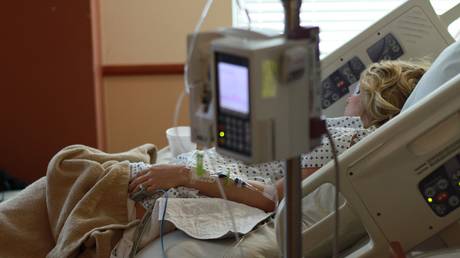 Police are rounding up the DNA of all male employees of the Arizona healthcare facility where an Apache woman who spent the last 14 years in a vegetative state recently gave birth to a healthy boy.

Phoenix Police served a DNA warrant on all male employees of Hacienda Healthcare in their hunt for the father of a boy born last month to a 29-year-old Apache woman in a vegetative state.


“The baby boy has been born into a loving family and will be well cared for,” said John Micheaels, a lawyer retained by the woman’s family, adding that they were not “emotionally ready to make a public statement.”

The family obviously is outraged, traumatized and in shock by the abuse and neglect of their daughter at Hacienda Healthcare.

The San Carlos Apache Tribe also released a statement on Tuesday upon learning the woman’s identity. “It is my hope that justice will be served,” said tribal chairman Terry Rambler, expressing his trust in the police investigation.

The cops compelled DNA samples only after the facility discovered it could not legally force its employees to undergo DNA testing or voluntarily conduct the testing itself under federal law.

The victim has been cared for at Hacienda since a near-drowning incident left her in a persistent vegetative state 14 years ago. She gave birth on December 29, surprising the facility’s staff, who reportedly didn’t know she was pregnant until she began moaning. The Arizona Department of Economic Security has since conducted a health and well-being check on all other patients at the facility.


Hacienda CEO Bill Timmons resigned on Monday after 28 years at the facility, which was rated “much below average” on the Medicare website and nearly had its government funding revoked after a 2013 investigation found at least one staff member was making inappropriate sexual comments to patients and staff were deficient in reporting patient abuse complaints. In 2017, another investigation found patients were not given sufficient privacy while naked or showering at the facility.