Apple Park, the tech giant’s $5 billion glass and metal California headquarters, has proven to be a somewhat painful case of style over substance, as multiple employees have injured themselves walking into walls at the facility.

Building inspector Albert Salvador previously warned that people would not be able to distinguish between doors and walls at the complex, which took five years to construct. However, their advice fell on deaf ears and at least three Apple employees have collided with the ultra-transparent glass with such force that they required emergency medical treatment.

“We did recognize that this is going to be an issue, especially when they clean the glass,” Salvador said, as cited by The SF Chronicle. “When you clean the windows, you can’t even tell some of them are there.”

The floor-to-ceiling glass panels that make up the majority of the building were specially treated to achieve an exact level of transparency and whiteness to give the facility the illusion that it blends into the surrounding forest. The building’s doors are flush with the walls and have perfectly flat thresholds to prevent engineers from having to adjust “their gait when entering the building” and avoid unnecessary “distraction from their work,” a construction manager told Reuters.

Apple Park finished construction of the facility last year, and many of the roughly 13,000 employees moved into Apple Park’s spaceship building on January 2. It was not long before employees fell afoul of the ultra-modern, but highly impractical design, as transcripts of calls to the emergency services, obtained by The San Francisco Chronicle, show.

“We had an individual who ran into a glass wall pane and they hit their head. They have a small cut on their head and they are bleeding, slightly disoriented. We have on site security with them right now,” an Apple employee told the dispatcher on the first call on January 2.

“So we had an employee, he was on campus and he walked into a glass window, hitting his head, has a little bit of a cut on the eyebrow,” a second unnamed Apple employee said later that same day. 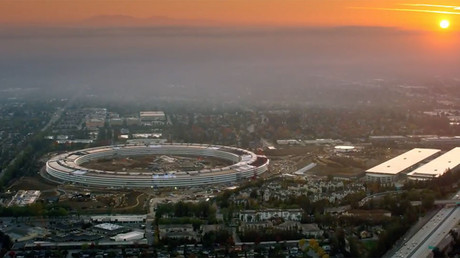 “Um, I walked into a glass door on the first floor of Apple Park when I was trying to go outside, which was very silly,” another employee told the emergency medical dispatcher on January 4.

“You keep breaking up. You walked through a glass door?” the operator responded.

“I didn’t walk through a glass door. I walked into a glass door,” the Apple employee responded. None of the injuries required hospitalization.

Disgruntled employees have also reportedly resorted to using yellow sticky notes to mark the glass doors and avoid any further collisions. The notes were subsequently removed as they detracted from the building’s aesthetic. The company quickly replaced them with rectangular stickers to differentiate door and window panels.

“There’s not a straight piece of glass on this building” Steve Jobs famously boasted of the structure before his death in 2011, adding that Apple had “a shot at building the best office building in the world.”

California state building codes require that doors be identifiable and protect “against the hazard of walking through glass by barriers or conspicuous durable markings.”