A former Irish prime minister has broken his silence on Brexit, saying the British government’s position on the Irish border “lacks credibility” and that the ruling Conservative party is “riven by dissent” on the issue.

Enda Kenny, who served as Ireland’s Taoiseach from 2011 to 2017, made the uncharacteristically blunt comments in what was his first major speech since stepping down from office last summer. 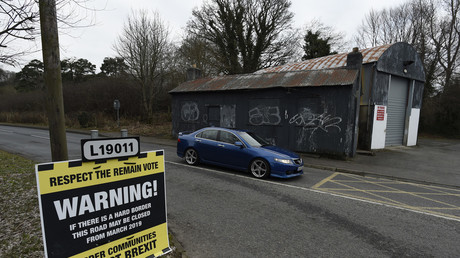 The comments were made as Kenny accepted the award of ‘European of the Year’ from his successor Leo Varadkar during a recent ceremony at the Shelbourne Hotel in Dublin.

During his acceptance speech, Kenny said he was “appalled” by the way Theresa May’s government has handled the Brexit negotiations, adding that her cabinet was “riven by internal dissent, lacks credibility and clarity on its most serious challenge in decades.”

“Six months on from an agreement being reached in December last year, very little progress has been made,” he said, adding that the “EU continues to negotiate from a unified position.”

Readjusting his aim to target British business, Kenny said they had been too quiet on speaking out against Brexit for fear of a Labour government under Jeremy Corbyn.

“British business is afraid to speak out because of the spectre of a Labour government. But if this matter is not dealt with, and if negotiations have not been concluded and signed off before the EU Council in October, then we might have a very different outcome,” he said.

READ MORE: N. Ireland could be given joint EU/UK status – UK source, in plan that could reshape Westminster

Kenny, who had played a part in the early negotiations after the UK voted to leave the EU in 2016 had been previously described by top Brexiteer Jacob Rees-Mogg as being “mature” and “responsible,” while possessing a “common sense approach” to Brexit negotiations when compared to the actions of his “irresponsible vote-catching” successor Varadkar.

Rees-Mogg made the comments in March after Varadkar suggested article 50 could be extended if no deal with the EU was in sight.

But while Kenny’s comments may find him new fans among Remainers in the UK, not everyone was full of praise.

The ‘European of the Year’ award, granted by the European Movement Ireland, had been criticized by Irish MEP Luke ‘Ming’ Flanagan as a  “self congratulatory slap on the back,” as funding for the organization came from the Department of the Taoiseach.

“So basically today we have had to listen to wall to wall coverage of Enda giving an award to himself. Worse still. You had to pay for it,” Flanagan said in a Facebook post.