Boris Johnson is set to meet with Richard Ratcliffe, the husband of a British woman jailed in Iran, Nazanin Zaghari-Ratcliffe. It follows an apology by the foreign secretary for “anguish” caused by false remarks he made about the reason for her travels.

Ratcliffe will meet Johnson and his consular specialists at the Foreign Office on Wednesday. He is likely to accompany the foreign secretary on his imminent visit to Tehran so he can see his wife, who has been held largely in solitary confinement since April 2016.

The visit would also give him an opportunity to see his two-year-old daughter Gabriella, who was with her mother when she was arrested. She is staying with her grandparents in Tehran.

There are concerns within the Foreign Office that Ratcliffe might still be arrested by the Iranian police, even if he is accompanying Johnson. Ratcliffe has not so far gone to Iran because of visa difficulties and the threat of being detained himself.

A Foreign Office statement to the BBC said Johnson and Ratcliffe will meet to discuss a request to give Zaghari-Ratcliffe “diplomatic protection” – which, under international law, allows a state to take diplomatic action on behalf of a national. Earlier this week, Downing Street said it was “one of the options” being considered in the case. 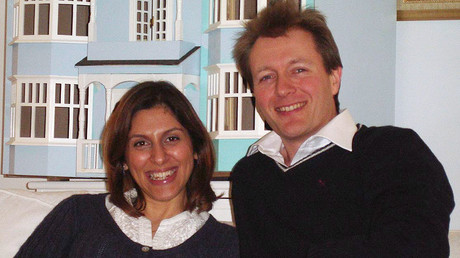 Johnson had “made it clear that no stone should be left unturned” in securing her release, the statement added. “The Foreign Office remains very concerned about all our dual nationals detained in Iran, and is doing everything it can in each of their cases, including trying to secure access to them and ensure their welfare.”

Earlier this month, Johnson told the Foreign Affairs Committee that Zaghari-Ratcliffe had been training journalists in Iran, when in fact she was on holiday visiting family. Three days after he made the comments, she was taken unexpectedly before a court and accused of “spreading propaganda against the regime.”

It is feared that Johnson’s gaffe may result in her jail term being lengthened by up to five years. She has already been jailed for 18 months over alleged involvement in a coup. Some critics have called for Johnson to resign, but Ratcliffe said it would not be in his wife’s best interests.

Zaghari-Ratcliffe is said to be close to a nervous breakdown. There are also fears she is developing cancer after finding lumps in her breasts.

Earlier this week, Johnson finally apologized for the “distress” and “suffering” he had caused with the comments he made on November 1, and retracted “any suggestion she was there in a professional capacity.”

Johnson’s Tehran visit, expected in the next few weeks, had originally been conceived as a marker of strengthening Anglo-Iranian relations after signing the Iran nuclear deal, but without a breakthrough ahead of his visit, the meetings with Iranian officials are likely to be dominated by the issue of her release.