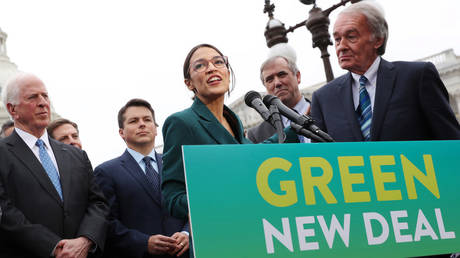 Alexandria Ocasio-Cortez’s Green New Deal died an ignominious death on the Senate floor, without one ‘yes’ vote – but the congresswoman says she told senators to vote ‘present’ after it was ‘rushed’ to the floor without a hearing.

The vote, called by Senate majority leader Mitch McConnell, was a resounding 57-0 against, with 43 Democrats voting “present.” Ocasio-Cortez said she advised her party to vote that way because McConnell was trying to rush the bill through, ensuring its demise without so much as a hearing on the issues involved.

Because I encouraged them to vote present, along w/ others.

McConnell tried to rush the #GreenNewDeal straight to the floor without a hearing.

The real question we should be asking: Why does the Senate GOP refuse to hold any major hearings on climate change? https://t.co/de8oKOXeJf

“The real question we should be asking: Why does the Senate GOP refuse to hold any major hearings on climate change?” Ocasio-Cortez tweeted, pointing to devastating floods in the Midwest as a sign that climate catastrophe was imminent.

Democrats joined her Senate counterpart Ed Markey (Massachusetts) in condemning McConnell’s “sham” vote on what was ultimately a non-binding resolution, meaning it was not legally enforceable and would at any rate have needed a 60-vote supermajority to proceed, an impossibility given the Democrats’ minority in the Senate.

Senate minority leader Chuck Schumer slammed the “political stunt,” accusing McConnell of making a “mockery of the legislative process,” but spun the debacle as an ultimate victory for the progressive congresswoman: “With this exercise, they have also elevated the issue in a way I am sure they never intended, and for that, I want to thank them, because now we’re finally talking about climate change.”


Three Democratic senators crossed the aisle to vote “no” on the Deal, as did Independent senator Angus King, who usually votes Democratic. It’s unclear what version of the Deal the Senate voted on, however, as the text of the resolution disappeared from Ocasio-Cortez’s website over a month ago after certain provisions sparked media outcry.