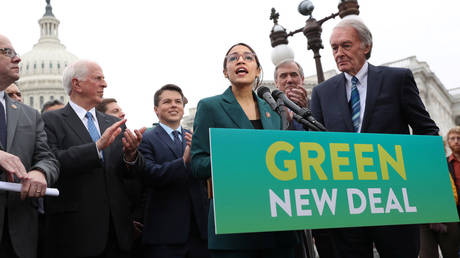 Greenpeace founder turned climate change skeptic Patrick Moore has reignited his feud with Congresswoman Alexandria Ocasio-Cortez, calling her a “pompous little twit” and “garden-variety hypocrite” in a barrage of tweets.

Moore helped found the veteran eco-organization in the 1970s, before parting ways with his fellow activists over their left-wing politics and becoming an advocate for nuclear power and lobbyist for the forestry industry. Lately, he has been tussling with New York Congresswoman Alexandria Ocasio-Cortez over the ‘Green New Deal,’ an ambitious piece of environmental legislation that seeks to dramatically overhaul America’s energy sector and economy in a bid to slash carbon output.

Moore began picking the Green New Deal apart in February, ridiculing its promise to remove “greenhouse gases from the atmosphere.”

“Technically,” he stated, “this would mean removing all H2O vapour and all CO2 which would mean the eradication of all life on Earth.”

The legislation has been ridiculed from all sides for its proposed abolition of air travel and fossil fuel powered vehicles, as well as its estimated cost of over $50 trillion, over twice the worth of the entire US economy.

Ocasio-Cortez has stuck to her guns, however. In a tweet, the Bronx Democrat told skeptics “If you don’t like the Green New Deal, then come up with your own ambitious, on-scale proposal…until then, we’re in charge.”

Moore hit back, calling AOC a “pompous little twit” and claiming that “if fossil fuels were banned every tree in the world would be cut down for fuel for cooking and heating. You would bring about mass death.”

Pompous little twit. You don’t have a plan to grow food for 8 billion people without fossil fuels, or get the food into the cities. Horses? If fossil fuels were banned every tree in the world would be cut down for fuel for cooking and heating. You would bring about mass death.

More recently, a New York Post hit-piece lambasted Ocasio-Cortez for using cars to get around while campaigning in New York instead of the subway system. “I also fly and use A/C,” Ocasio-Cortez responded. “Living in the world as it is isn’t an argument against working towards a better future.”

“The ‘world as it is’ has the option of taking the subway rather than a taxi,” Moore continued. “You’re just a garden-variety hypocrite like the others. And you have ZERO expertise at any of the things you pretend to know,” he tweeted on Sunday, before calling AOC an “immature bully.”

The “world as it is” has the option of taking the subway rather than a taxi. option of Amtrak rather than plane, option of opening windows rather than A/C. You’re just a garden-variety hypocrite like the others. And you have ZERO expertise at any of the things you pretend to know

Yep, arrogance plus ignorance (of science, technology, history, etc.) is a recipe for disaster, especially when the person delivering it is so outwardly attractive. Unfortunately there is an immature bully inside who would stop at nothing to gain control. https://t.co/QXDx72f2KW

Ocasio-Cortez’ more mainstream Democrat colleagues have paid lip-service to the Green New Deal, but have been cautious about declaring support for the plan. House Speaker Nancy Pelosi brushed it aside in an interview with Rolling Stone on Thursday, saying it “goes beyond what our charge is.”

In addition to slashing carbon emissions, the deal calls for widespread wealth redistribution to “counteract systemic injustices,” and includes provisions for universal healthcare and taxpayer-funded college tuition. An early overview of the plan, since removed from Ocasio-Cortez’ website, promised “economic security for all who are unable or unwilling to work,” swore to sideline the private sector in all environmental decision-making, and even vowed to eliminate “farting cows.”

Republicans argue that the deal is tantamount to full-blown socialism. Its more outlandish provisions have turned it into a punching bag for the GOP, who have sought to paint the Democratic party as the party of socialist totalitarianism ahead of next year’s election. After referring to AOC as a raving “lunatic,” President Donald Trump said on Saturday that the deal “is the new Democrat platform, and I don’t want to talk them out of it…I want them to embrace this plan. I just want to be the Republican who runs against them.”