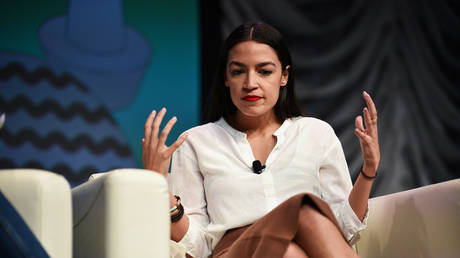 Democrat Alexandria Ocasio-Cortez tweeted an irate stream in response to a Fox show guest who mocked how she pronounces her name and for the media outlet apparently repeatedly getting her surname wrong.

During a segment on her show on Wednesday, Fox host Laura Ingraham suggested that AOC put on an accent whenever she introduced herself. The show’s guest Joe Digenova added, “she does the Latina thing”, before he put on an exaggerated accent and said her name (and initially mistaking her first name).

My last name is Ocasio-Cortez. Full stop. That’s my name.

No, you can’t say “Cortez.” I’ve never used that in my life. “Cortez” is referring to someone else.

Even if they‘re trying to be rude + wrong, my dad’s last name was Ocasio anyway.

(His name was hyphenated too, though.)

Hitting back at both Ingraham’s show and Fox in a Twitter thread, AOC remarked that “Fox News likes to say my name (incorrectly) as “Cortez,” which I can only imagine is bc that sounds more ‘stereotypically’ Hispanic + probably incites more ‘anxiety’ for them.”

Reiterating that her surname is Ocasio-Cortez, the New York Representative commented: “No, you can’t say “Cortez.” I’ve never used that in my life. “Cortez” is referring to someone else.”

AOC was also quick to strike back over the “Latina thing” remark:

Unless of course she‘s talking about being multilingual, which we know isn’t a ‘Latina thing.’

The surname debacle drew heated responses on Twitter, with many posting messages in support of AOC and criticizing the show and the station for the comments:

I think a lot of people don’t understand the difference between having an accent and pronouncing words correctly. To pronounce Spanish words correctly you have to use phonemes that don’t exist in English; I guess to some people that sounds like “putting on an accent.”

The multilingual thing is an everywhere but America thing.

“Why does she insist on pronouncing her name correctly when I can’t even bother to get her first name right?”

Fox News and Republicans always claim leaders of color are pawns of larger influence. This is what happened with Obama and now AOC, and it’s a hallmark of white supremacy, going a ways back, to claim minorities are subject to political manipulation. https://t.co/zLBebl7hkv

Many others, though, criticized Ocasio-Cortez for what they saw as her over-reaction to the comments, saying she should grow up and focus on something more worthwhile.

There you go again, imagining three headed monsters around every corner. It must be terrible to be so paranoid.

So AOC hates being called Cortez 🤔

I’ll give you one guess what I’m going to call her from now on.

When i was your age (2 yrs ago) by biggest problem was losing my ability to use stairs. I didn’t take to twitter to have a breakdown Any time someone wanted to do something involving stairs or assumed I could. I’m just saying. Big picture. Priorities. GROW UP!