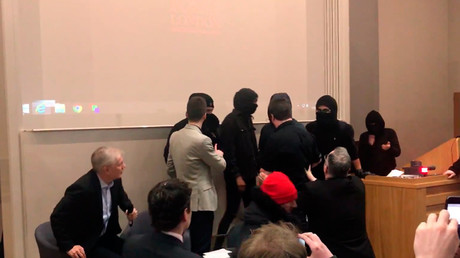 Anti-fascist protesters stormed an event by an ‘alt-right’ speaker at King’s College London, Monday night.Demonstrators wreaked havoc,successfully stopping the talk while scuffles broke out and windows were reportedly smashed.

Dramatic footage shows the moment the left-wing group stormed a lecture theater packed for a speech by Carl Benjamin. Benjamin, who goes online by the moniker of ‘Sargon of Akkad’, has been described by various outlets as a member of the so-called ‘alt-right’, a movement known for its white-supremacist views.

The protesters grabbed the speakers’ microphones before smashing windows and leaving threatening notes to the organizers, the Daily Mail reports. Videos also shows the protesters chanting “no fascism on campus,” as alarms rang out in the background.

“We will continue to pursue our goal of resisting any threats to freedom of speech. By continuing to plan the range of events and campaigns we have in store, in order to encourage productive dialogue on a wide range of topics,” a spokesman for the KCL Libertarian Society, the group which organized the event, told the Evening Standard.

“The event has now been canceled and evacuated after threats to the moderator. Speech, no matter how controversial, should never be met with violence.”

The Met Police confirmed they were called to the university, in Westminster, just before 7pm on Monday night. They told the Standard the group had been dispersed by the time they arrived.

Benjamin is a prominent English YouTuber whose videos feature anti-progressive views. A piece on the vlogger in the Daily Dot described Benjamin as using his videos to target “feminism, Islam and Black Lives Matter,” as well as “the notion of straight white male privilege.” His channel currently has more than 760,000 subscribers.