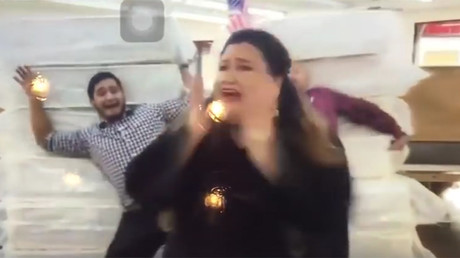 It’s been 15 years since the September 11, 2001 attacks, but a commercial from a San Antonio mattress store may prove it’s still “too soon.” As part of its “Twin Towers sale,” Miracle Mattress offered to sell any sized mattress for the price of a twin.

A commercial showing Miracle Mattress manager Cherise Bonanno standing in front of two other employees in front of stacks of mattresses relies heavily on Twin Tower references. This marketing tactic blew up in the face of the store and forced them to issue an apology.

The advertisement in question begins with Bonanno asking, “What better way to remember 9/11 than with a twin tower sale?”

While there may be better ways, the sale is actually a very good one for anyone looking to buy a mattress larger than a twin size.

“Full mattress?” the employee to her left asks.

“Queen mattress?” the employee to her right asks.

“King mattress?” the two men ask in disbelief. And you get the idea.

Bonanno then announces that the sale will last all day long and swings her arms, causing the two men to tumble into the stacks of mattresses behind them. She cries out before calming herself.

Based on online business reviews, however, it seems customers will never forgive. The commercial that lasts less than 20 seconds has some on social media livid.

The Yelp page for Mattress Miracle contains comments such as one from Eileen C, reading, “Hey fat ass: you just lost a s*** load of sales from your distasteful commercial!”

“The only customers you’ll have is blood money: Muslims supporting you!” the negative review adds.

Guy S called the bed sellers “Scum of the earth,” and Michael J. of San Antonio called the video “one of the most inhumane and offensive commercials I’ve ever seen.”

On Thursday, the owner of the company posted an apology, explaining that the video was made without permission and called it “an affront to the men and women who lost their lives on 9/11.”

The apology also guaranteed “a personnel review to hold these employees accountable for their actions.”

The owner, Mike Bonanno, has come under fire for the fact that his daughter was responsible for the offensive pitch. The apology was not well received, with Shelly Kay Rowland commenting “STOP with the BS apologies, they are just as pathetic and tasteless as the ad was! Do yourself a favor and close your doors. You’re DONE!”

Michael Munoz suggested Miracle Mattress, “Take your apology and shove it under your fat chins!!”

In the subsequent years following 9/11, 48 movies have been made about the tragedy, including the 2008 Remember Me, where Twilight star Robert Pattinson dies in the Twin Towers as a key part of the film. In addition, a recent Seinfeld spec script about the characters dealing with 9-11 was a viral sensation.