A cross-party group has tabled a new motion against Tony Blair, on the basis of facts revealed in the Chilcot report, that could see him stripped of his place on the Privy Council – a potential humiliation for the former leader, who is attempting to play a bigger role in UK politics.

The motion, which will be debated on Wednesday, claims that the seven-year Chilcot inquiry “provided substantial evidence of misleading information presented by the then prime minister and others on the development of the then government’s policy towards the invasion of Iraq as shown most clearly in the contrast between private correspondence to the United States government and public statements to parliament and people.”

It asks for “a further specific examination of this contrast in public and private policy and to report on what further action is necessary to help prevent repetition of this disastrous series of events.”

The motion was tabled by Alex Salmond, the former leader of the SNP, and has been backed by Plaid Cymru, the Greens, and senior figures from the two leading parties, according to the Observer, which broke the story.

“An example should be set, not just of improving government but holding people to account,” Salmond told the Sunday newspaper.

Salmond claimed that as a result of the inquiry, parliament could “recommend whatever action it pleases”, including depriving Blair of a place on the Privy Council, an advisory body that encompasses respected senior figures, and serves as a marker of establishment respect.

“If he continues to be a member of the Privy Council while there is all this damning evidence against him, what does that say about the institution?” Hywel Williams, Westminster leader of Plaid Cymru, the Welsh nationalist party, told the Observer.

Williams said the process would be “scrupulously fair” to the man who led the UK between 1997 and 2007, and that Blair would be given a chance to defend his position to MPs.

“The Chilcot report confirmed Tony Blair lied to the public, parliament and his own cabinet in order to drag us into the Iraq war. Privately, he said he would support Bush ‘whatever’ eight months before the war – everyone else was told war could be avoided,” said Caroline Lucas, the co-chair of the Greens.

“Thousands of lives were lost because he put that promise before all the evidence. Yet – despite the damning evidence against him contained in the inquiry’s report – no action has been taken against the former prime minister.”

Sir John Chilcot, the civil servant, who led the inquiry over the 2003 decision to invade Iraq, said that Blair went “beyond the facts” when advocating involvement in the conflict, and pushed through his views with “sheer psychological dominance,” but said he “absolved him from a personal and demonstrable decision to deceive parliament or the public.”

But Salmond said the facts revealed by the 2.6 million word report, released in July, were damning, while officials were “preoccupied with preventing previous and future prime ministers being held accountable.” 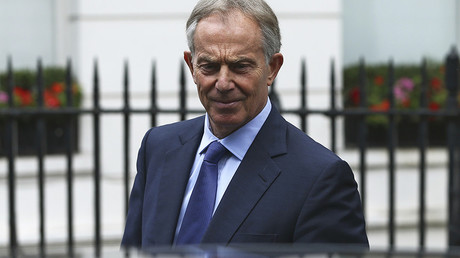 Salmond also referenced a slew of recent stories around the genesis of the inquiry, including the Observer Freedom of Information request, which revealed documents last week suggesting that it was set up by civil servants with a “legalistic” focus and designed to “avoid blame.”

Blair’s office has refused to comment on the motion, but sources told the Observer that Blair was unconcerned, as he had faced similar unsuccessful motions in the past, even without the backing of Chilcot.

Having served in a series of international roles since resignation, the Europhile Blair has recently moved his office to central London, and has campaigned for Britain to “keep its options open” over Brexit. He has, however, ruled out running for election, or being appointed to a senior government post.

“I can’t come into frontline politics. There’s just too much hostility, and also there are elements of the media who would literally move to destroy mode if I tried to do that,” he told the New Statesman earlier this week.