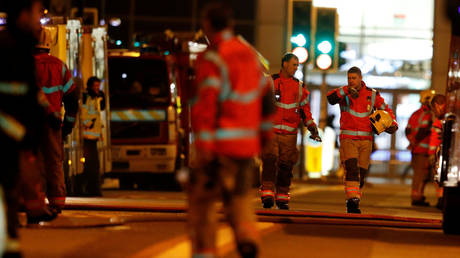 A hazmat incident has been declared overnight in Greater Manchester, where numerous fire crews were scrambled to deal with an ammonia leak. Residents were told to stay indoors for safety reasons.

A massive ammonia leak had affected hundreds of residents in the community of Salford on Wednesday night, according to the city’s fire service. The leak, which the service said originated from a local factory, triggered a hazmat (hazardous material) operation.

As the events unfolded, dozens of firefighters – dressed in full-body chemical protective suits and gas masks – rushed to the scene. They spent hours trying to contain the leak, local media reported.

Crews have been tackling the ammonia leak for a few hours. A decontamination operation is underway. Please avoid Langley Road South, Salford as it’ll be closed for some time. pic.twitter.com/zMTR6fP7bH

The fire service also deployed decontamination teams and advised locals to keep windows and doors shut. Aside from that, traffic has been suspended in entire area.

GMP officers are supporting GMFRS at a large scale incident on Langley Road South in Salford. The road is currently closed so please use an alternative route or avoid the area. #salford#trafficalert#gmp

Finally, at around 6am, the fire service said in a tweet: “Road closure update: Langley Road South should be open in the next 5 minutes thanks to fast acting crews who have isolated the leak and make the area secure. Have a safe journey!”

Ammonia, also referred to as hydrogen nitride, is a colorless gas lighter than air. It is non-flammable and easily dissolves in water. It is used to produce fertilizers, plastics, and pharmaceuticals, and as a coolant in gas refrigerators. If released into the air, ammonia can lead to lung burns and skin irritation.