Charlie Rowley, a survivor of the late-March alleged nerve agent poisoning in Amesbury, has been taken back to the hospital, UK media report. The man has almost gone blind, but it’s not a nerve agent symptom.

Rowley was taken back to the intensive care unit of the Salisbury Hospital on Saturday. His brother, talking to British media, said the man had blurred vision and couldn’t see.

Rowley’s sudden illness is unrelated to the supposed nerve agent attack he suffered weeks ago, however. The hospital staff has made no comment on Rowley’s admission, but made it clear they are not treating anyone with nerve agent poisoning symptoms. 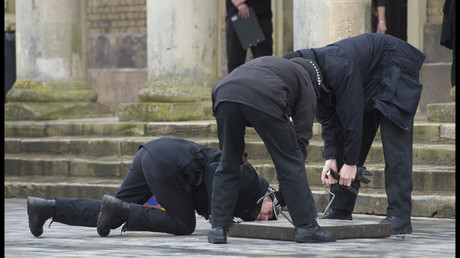 Rowley and his girlfriend Dawn Sturgess, both known drug and alcohol addicts, were first taken to the hospital in late June after suffering what British authorities said was ‘Novichok poisoning’ – the effects of a supposed Soviet-made nerve agent used on former double agent Sergei Skripal and his daughter in March. Sturgess is said to have sprayed herself with the chemical from a perfume bottle they picked up in a park while out drinking.

Sturgess later died, but Rowley made a recovery and was moved to a safe house, where he talked about how he couldn’t wait to have a drink, according to The Sun.

British investigators claim the June 30 Amesbury poisoning was collateral damage from the alleged nerve agent attack on the Skripals on March 4. Russia is being blamed for both incidents, with the premise that the perpetrators left behind some of the “military-grade nerve agent” when they targeted the Skripals.

Moscow has been facing massive diplomatic backlash despite the lack of conclusive evidence to prove its involvement in either case. After British Prime Minister Theresa May’s allegation that Russia was “highly likely” the culprit, dozens of Russian diplomats were expelled by the UK, US, and a number of European countries. The US has also imposed economic sanctions on Russia, citing the Chemical and Biological Weapons Control and Warfare Elimination Act of 1991.

Moscow has rejected the presumption of guilt and offered assistance in the investigation, but has so far been denied a say in the matter.