Republican Senate nominee Corey Stewart has argued that the American Civil War was not fought over slavery, but over states’ rights.

Speaking to The Hill on Monday, Stewart said that while not all parts of his native state of Virginia’s history are “pretty,” the Civil War ultimately was not about slavery.

“If you look at the history, that’s not what it meant at all, and I don’t believe that the Civil War was ultimately fought over the issue of slavery,” Stewart said. “We have to put ourselves in the shoes of the people who were fighting at that time and from their perspective, they saw it as a federal intrusion of the state,” he said.

Stewart’s softening of the Confederate brand drew some criticism on Twitter, with Democrats and critics calling his views “trash” and “out of touch with history and reality.”

The 1861 to 1865 Civil War pitted the abolitionist northern, or Union states, against the slave-owning southern Confederacy. The Confederate states had argued for their right to secede from the Union, which they saw as ruled by northern elites who were out of touch with the different cultural climate of the south. 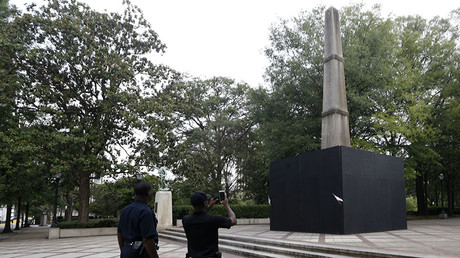 Slavery benefited the Confederacy, where the economy was dependent on plantation farming, and free labor gave the southern states an economic edge. The newly industrialized north did not need to rely on slavery, and could more easily afford to abolish it.

“I’m not opposed to somebody naming a school after a president of the United States, even though I don’t like Barack Obama,” Stewart told The Hill on Monday. “Don’t take the name of a historic figure off a school. That is political correctness run amuck.”

Stewart has been an outspoken defender of preserving the south’s cultural heritage. He has also been a vocal supporter of Donald Trump.