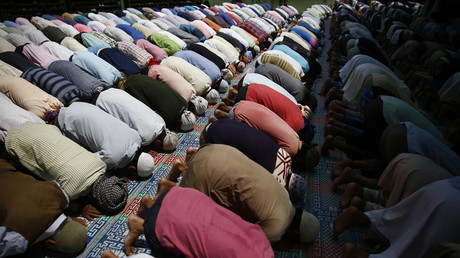 Nearly half of Britons are anti-Muslim, research figures revealed but, according to the survey, the UK isn’t alone. Anti-Islam sentiments are rife across Europe, with negative feelings toward Muslims highest in Finland.

According to data from the Pew Research Center, a whopping 62 percent of Finns hold negative views towards Muslims, while 42 percent of Europeans admitted to anti-Muslim sentiments.

In the UK, 45 percent of church-attending Christians say Islam is fundamentally incompatible with British values and culture, as do roughly the same share of non-practicing Christians

(47 percent).  For those adults with no religious affiliation, just 30 percent say Islam is fundamentally incompatible with their country’s values.

According to the study, the pattern continues on whether there should be restrictions on Muslim women’s dress. Church-goers are more likely than the non-religious to say Muslim women should not be allowed to wear any religious clothing.

The Pew Research Center is a non-partisan fact-tank that informs the public about the issues, attitudes and trends shaping the world. To obtain the data for their survey on religious attitudes, Pew conducted surveys among 24,599 adults across 15 countries in Western Europe from April to August, 2017.