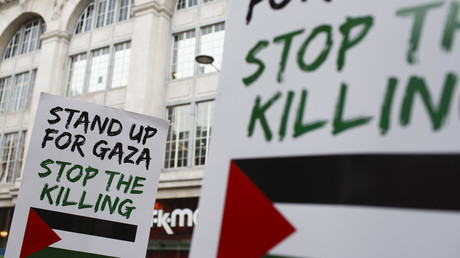 Pro-Palestinian protesters commemorating Tuesday’s Nakba Day, or Day of Catastrophe, rallied in London, where they were faced with a counter-demonstration from supporters of the Israeli government.

Speaking to Ruptly, those commemorating the expulsion and fleeing of Palestinians preceding and following the creation of Israel in 1948, said they were there to mark the 70 years since “the Catastrophe” and also to mark “the seven weeks since Palestinians in Gaza have been marching towards the border to demand the right to return.”

“All of us here in Britain have a duty to stand up for the Palestinians particularly in the light of the role of our government [in the conflict],” activist and Stop the War convenor Lindsey German told protesters.

One pro-Israeli counter-protester said that those commemorating the day “need to look out of the box and really look at what is going on instead of obsessively attacking the only country that they would really be quite safe in.”

Following the rally in London, 35,000 people have been protesting at Gaza’s border fence on Monday ahead of the inauguration of the US embassy in Jerusalem which will coincide with Nakba.

The Palestinian health ministry has so far reported 38 deaths at the hands of Israel Defense Force forces including a 14-year-old boy, a medic and a man in a wheelchair who was using a slingshot, according to Reuters reporting. Over 1,600 have been injured, including 74 children and 23 women.