If Israel’s transport minister has his way, high-speed rail commuters will soon pass through Donald Trump Station as they travel to and from Jerusalem’s Western Wall.

Following Trump’s controversial recognition of Jerusalem as Israel’s capital (and the UN General Assembly’s no less historic repudiation of Washington’s move), Israeli Transport Minister Yisrael Katz is pushing ahead with a plan to extend Jerusalem’s soon-to-open high-speed rail line to the Western Wall – and he wants to name a station after The Donald.

The proposed station would be part of a project that calls for excavating more than 2 miles (3km) of tunnel beneath downtown Jerusalem and under the disputed Old City.

During his meeting with Israel Railways executives, Katz proposed a future Trump Station to commemorate the US president’s “brave and historic decision to recognize Jerusalem as Israel’s capital” earlier this month.

If Trump Station becomes reality, Trump would hardly be the first US president to have his name preserved in perpetuity by foreign infrastructure – more often than not for highly dubious reasons.

Bill Clinton received his very own former-Yugoslavia boulevard on November 1, 2009. 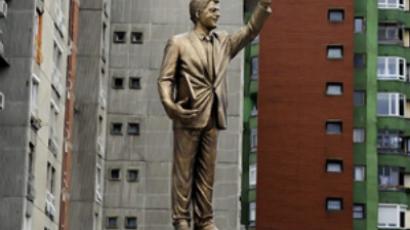 The boulevard, located in Kosovo’s capital of Pristina, is complimented by a 10ft-high (3 meter) statute of the former president, which is reportedly meant to honor Clinton’s role in the break-up of Yugoslavia.

During its 78-day bombing of Yugoslavia, NATO launched 2,300 missiles and dropped 14,000 bombs, including depleted uranium bombs and cluster munitions – which to this day continue to pose a threat to civilians.

Over 2,000 civilians were killed, including 88 children, and thousands more were injured. Over 200,000 ethnic Serbs were forced to leave their homeland in Kosovo.

In 2000, Amnesty International accused NATO of committing war crimes during its air campaign against Kosovo and Serbia.

George W. Bush gets his own Ghanaian highway

The George Walker Bush Highway is a six-lane, 9-mile (14km) highway in the Greater Accra Region of Ghana. Plans for Bush Highway were announced in 2008 by Ghana’s president, John Kufuor.

“Mr. President, in appreciation of your many kind gestures towards Ghana and other parts of Africa, and to immortalize your good will to us, my government has decided to name this road, this very strategic road after you,” Kufuor said during a formal dinner held in honor of Bush in Ghana’s capital of Accra. The road was completed with US aid money, according to Reuters.

Bush has a complicated legacy in Africa. On the one hand, he is the creator of the US Africa Command (AFRICOM), which has ballooned into a secretive network of 36 US outposts scattered across 24 African nations. On the other hand, he really enjoys a good African dance-off:

In September 2005, George W. Bush was honored with a street name in the Georgian capital, leading to the city’s airport. During a visit to Tbilisi several months earlier, Bush was targeted by a disgruntled Georgian who tossed a hand grenade at the US president and his Georgian counterpart, Mikhail Saakashvili. The grenade failed to detonate, and the would-be assassin was later arrested and sentenced to life in prison.

However, in 2010, Georgian film director Zaza Svanidze called for the street name to be changed, pointing out that “our government is the outcome of a US foreign policy project – a ‘colored revolution’ – that has brought nothing positive to our country.”

Saakashvili came to power in 2004 after the ousting of President Eduard Shevardnadze in what was called the Rose Revolution. After a string of scandals, including a disastrous war against Abkhazia and South Ossetia, Saakashvili was pushed out of office in 2013. Now a self-described Ukrainian freedom fighter, he is currently wanted on corruption charges back in his native Georgia, while at the same time calling for his former pal Ukrainian President Petro Poroshenko to step down and threatening to launch yet another revolution.

In a likely attempt to remind America that it exists, Antigua renamed its highest mountain, ‘Boggy Peak,’ in honor of Barack Obama on his birthday in 2009. There were also less monumental honorable mentions, however, with two parasites, flatworm Baracktrema obamai and hairworm Paragordius obamai, also named after the 44th POTUS.

Obama’s smile is also said to have inspired the naming of a prehistoric lizard Obamadon found in Montana and Wyoming. Unfortunately, the 1ft-long beast with “tall, slender teeth” has long gone extinct.