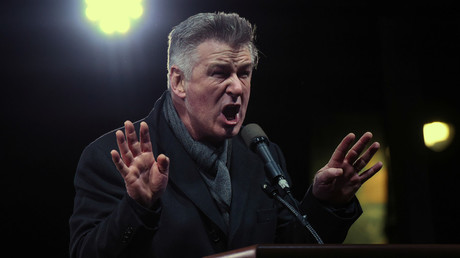 Saturday Night Live actor and relentless Trump critic Alec Baldwin has called on Democratic voters to “overthrow” the government of the United States at the ballot box.

The veteran actor also spoke out in favor of the #MeToo movement, despite speaking out against the movement in recent months.

Baldwin’s portrayal of Trump has drawn criticism from Trump himself, who said that the role saved Baldwin’s “dying mediocre career.”

Alec Baldwin, whose dying mediocre career was saved by his terrible impersonation of me on SNL, now says playing me was agony. Alec, it was agony for those who were forced to watch. Bring back Darrell Hammond, funnier and a far greater talent!

Baldwin’s call to revolution is a tame one compared to the calls for radical action from establishment Democrats in recent weeks. Hillary Clinton argued last week that Democrats “cannot be civil” until they “win back the House and or the Senate.” Meanwhile, Obama administration Attorney General Eric Holder reworked former First Lady Michelle Obama’s elegant “When they go low, we go high” phrase to better reflect the party’s attitude in 2018.

With the political divide in the US seemingly widening by the day, Trump took to Twitter on Monday to issue a similar call to arms to Republican voters. “The only way to shut down the Democrats new Mob Rule strategy is to stop them cold at the Ballot Box,” he tweeted, quoting conservative commentator Ben Shapiro. “The fight for America’s future is never over!”

“The only way to shut down the Democrats new Mob Rule strategy is to stop them cold at the Ballot Box. The fight for America’s future is never over!” Ben Shapiro