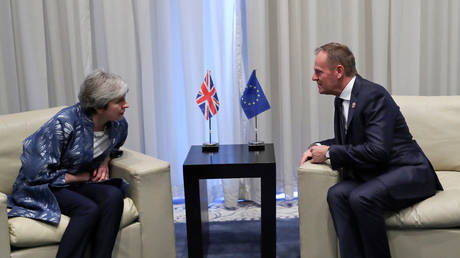 British Prime Minister Theresa May has rescheduled a “meaningful” vote on Brexit in the Commons for up to March 12 – just two weeks before the UK is due to leave the union – sparking criticism both in London and Brussels.

“We won’t bring a meaningful vote to Parliament this week,” May told journalists on her way to an EU-League of Arab States summit in Sharm el Sheikh, Egypt. She explained her decision by saying that her team was engaged in some “positive” talks with the EU about some details of the future deal, particularly those concerning the contentious Irish backstop – something which the EU have publicly ruled out, thus far.

She also attempted to sound optimistic as she said “it is still within our grasp to leave the European Union with a deal on March 29,” even though the date she set for the vote is dangerously close to this deadline. Her optimism, however, was not very convincing to either the opposition in the UK or EU officials.

Also on rt.com
‘Diminished country’: Dutch PM claims Britain is on the decline due to Brexit


May’s decision is nothing but “an admission of failure,” the Shadow Brexit Secretary Sir Keir Starmer said, calling it “the height of irresponsibility.” He also assumed that the prime minister seeks to make MPs accept her deal, which was previously rejected, by offering them a choice between it and no deal at all. “Parliament cannot stand by and allow this to happen,” he said.

The prime minister’s decision was also met with little enthusiasm in Brussels. “Kicking the can down the road only adds to the crippling uncertainty for businesses on both sides of the channel & for millions of citizens. I have seen many surprising decisions in a lifetime in politics. But this is close to being one of the most reckless,” Guy Verhofstadt, the EU parliament’s representative in the Brexit negotiations, wrote on Twitter following the development.

Kicking the can down the road only adds to the crippling uncertainty for businesses on both sides of the channel & for millions of citizens. I have seen many surprising decisions in a lifetime in politics. But this is close to being one of the most reckless. https://t.co/PNqmJtBrnq

The EU is even considering making the UK stay in the block until 2021 if May cannot get her deal approved by parliament, Bloomberg reports citing sources. “If by the beginning of March there’s no support for the deal then I think it would be good to postpone Brexit because a no-deal scenario is bad for the EU but extremely bad for the UK,” Austrian Chancellor Sebastian Kurz said.

According to Bloomberg, the 21-month plan has already received some backing from senior officials in the European Commission and in the European Council chaired by EU President Donald Tusk, although not all member states are ready to agree with it. Under the existing rules any delay to Brexit beyond the existing deadline should be requested by the UK and agreed by all other EU member states.

However, May herself seems to be skeptical about the usefulness of such an option, which would amount to the extension of Article 50 of the Lisbon Treaty, which currently gives London two years to leave the bloc since the start of the negotiation process.

“Extension of Article 50 doesn’t solve the problem .There will always come a point where we have to decide whether we accept the deal that’s been negotiated or not,” the British prime minister said.