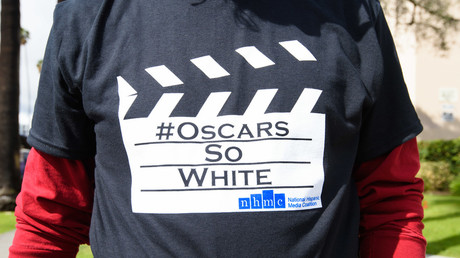 Teenage activists frustrated by a lack of racial diversity have recreated iconic film posters, placing them at bus stops around London. The posters replace white actors, like those in ‘Harry Potter,’ with a black cast.

‘Legally Black,’ a social equality group made up of four A-level students, took advantage of the hype surrounding the Oscars. The group exhibited the reimagined film posters around Brixton with the tagline: “If you’re surprised, it means you don’t see enough black people in major roles.”

In a statement on the group’s website, Legally Black said: “The aim of the project is to increase awareness surrounding the lack of black representation in the media and furthermore create dialogue and discussion around the often inaccurate and harmful depictions that do occur.”

The activists have mocked up some of the best-known British films and TV shows, including ‘Harry Potter,’ ‘Dr Who,’ and ‘James Bond.’ The campaign also recreated the posters of iconic international flicks like James Cameron’s ‘Titanic.’

The teen activists had their family and friends pose for photos for the project. 17-year-old Shiden Tekle said their idea to create posters and put them on display around the capital will “challenge people’s perceptions and assumptions” of black people.

“We are always looking at the media and never seeing any positive representations of black people,” he told The Guardian. “In big films, black characters are often playing criminals and drug dealers, and that quickly conditions people to believe that all black people are like that. So, we decided to put black faces in the big movies, and challenge people’s perceptions and assumptions.”

Legally Black campaigner Liv Francis-Cornibert penned an op-ed for iNews, explaining why the teens took to the streets of Brixton armed with movie posters to bring the issue of media diversity to the forefront of Londoner’s minds. “We – myself, Liv, and my friends Bel, Shiden and Kofi – are four advocates from South London who are passionate about the presentation of black people in the media,” she said.

“We’re calling on British media to tackle the under-representation and misrepresentation of Black British people in the media, by giving black actors, writers and directors the chance to bring to life more varied, complex and authentic characters and narratives.” The campaign follows research by the British Film Institute indicated that black actors played only 0.5 percent of lead roles in British films released between 2006 and 2016.