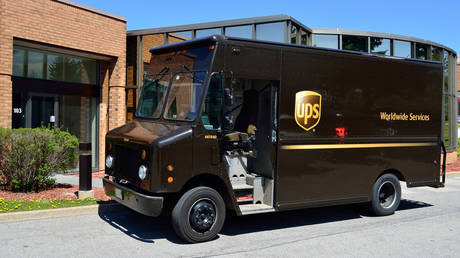 Law enforcement officers responded to an apparent hostage situation in a UPS facility in New Jersey, Armed officers have stormed the building and arrested the suspect, who was reportedly shot in the process.

After a standoff with police, the suspect was shot and taken into custody sometime after noon on Monday, Gloucester County prosecutor said, declaring the situation “resolved.”

According to police, the suspect did not surrender voluntarily, but was subdued by officers. The two female hostages were freed and were fine, the authorities said. There was no information about the condition of the suspect.

“UPS is working with law enforcement as they respond to an active shooter situation at one of the company’s supply chain processing facilities in Logan Township, NJ,” the company said in a statement on Monday morning. “We cannot provide information about the identity of people involved at this time.”

A man entered the facility and fired shots into the ceiling before taking his ex-girlfriend and another person hostage, according to NBC News. No injuries were reported.

Schools nearby were placed on lockdown, as were the nearby Home Depot, Amazon, and CEVA Logistics facilities.

Logan Township School district Superintendent, Patricia Haney: All three Logan Township school are in a modified lockdown based on information from local authorities. That means no one can enter or leave. Classes are proceeding as usual inside the building.

One viewer told WPVI-TV that someone who did not work at the facility was “having a confrontation with their significant other.”

Officials said there was some kind of relationship between the suspect and one of the female hostages, but provided no details.

The incident was first reported around 9am on Monday morning. The facility is located on Birchcreek Road in Logan Township, a town of around 6,000 people, 25 miles south of central Philadelphia.