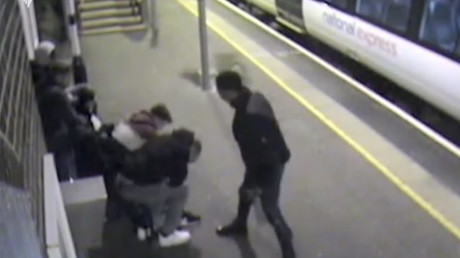 A British teenager has been jailed after permanently scarring a group of friends in what detectives described as a “vicious” and “cowardly” attack with industrial strength drain cleaner.

Alexander Bassey, 17, was sentenced to eight years in prison on Friday for the shocking unprovoked assault last May, which was caught on CCTV at Ockendon station in Essex.

The footage reveals how Bassey approached the five teenagers on a platform bench before suddenly emptying a bottle of a “highly corrosive substance” typically used to clear blocked drains over them.

Three of the victims received permanent facial burns, while one of the boys may have irreparable eye injuries.

Chief prosecutor Jason Corden-Bowen said that on the night of May 22, the 17-year-old went out with the “clear intention of harming someone.”

“As the train carrying him stopped at Ockendon station, he saw the victims who had been out celebrating at a party together and were waiting for their train home,” he said.

“He tried to entice them on to the train, but then got off, walked up to the teenagers, and without warning sprayed them in the faces with the liquid. He then ran back to the train to escape.”

In a statement, investigating officer Sergeant Gail McKemmie said he showed no remorse when questioned.

“I hope this sentence sends a very clear message: we will simply never stand for violence and aggression on the railway and will stop at nothing to bring violent offenders to justice.”