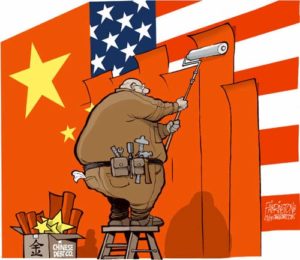 We face a world of multiple wars some leading to direct global power conflagrations and others that begin as regional conflicts but quickly spread to big power confrontations.

We will proceed to identify ‘great power’ confrontations and then proceed to discuss the stages of ‘proxy’ wars with world war consequences.

In our times the US is the principal power in search of world domination through force and violence. Washington has targeted top level targets, namely China, Russia,and Iran; secondary objectives include Afghanistan, North and Central Africa, Caucuses and Latin America.

China is the prime enemy of the US for several economic, political and military reasons: China is the second largest economy in the world; its technology has challenged US supremacy; it has built global economic networks reaching across three continents. China has replaced the US in overseas markets, investments and infrastructures. China has built an alternative socio-economic model which links state banks and planning to private sector priorities. On all these counts the US has fallen behind and its future prospects are declining.

In response the US has resorted to a closed protectionist economy at home and an aggressive military led imperial economy abroad. President Trump has declared a tariff war on China; and multiple, separatist, and propaganda wars; and an aerial and maritime war of encirclement.