Sensationalized news reports about theoretical radiation health hazards posed by electronic devices like cell phones, computer monitors and electric power lines often alarm the public for no reason other than attracting readers or viewers.  The reported experiments involve doses of radiation far beyond what users of electronic devices are exposed to.  Or the experiments are performed with lab animals or cells in a lab dish, hardly real world environments.

Office workers who spent ~8 hours a day, 5 days a week, in front of computer monitors had their thyroid hormone levels measured pre and post zinc supplementation.  They were compared with workers who spent ~4 hours/day exposed to EMF from computer monitors.  Daily zinc tablets (25 milligrams) were given to 8-hour computer workers and their pre and post zinc supplementation thyroid hormone levels were measured after 8 weeks. 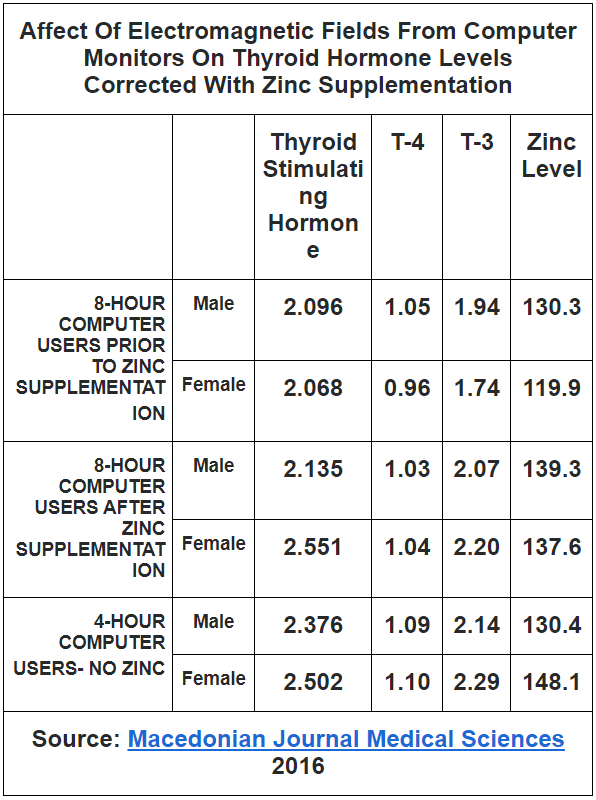 Iodine is the trace mineral usually identified with the thyroid gland function.  Other nutrients such as vitamin A, iron, selenium and zinc interact with iodine to facilitate proper thyroid function.  Zinc has been shown to normalize thyroid hormone levels but only among subjects with enlarged thyroid (goiter).  So it was a surprise to learn that zinc protects…