As the entire F-35 fleet was yet again grounded for technical inspections, in the wake of its first crash in September. RT looks at the abject history and prospects of the most expensive Pentagon program in history.

Over $300 billion has been spent on the project to create a state-of-the-art fifth-generation multi-role fighter since 1992, with the eventual cost likely to easily cross the trillion dollar threshold, unless the Pentagon decides that enough is enough. 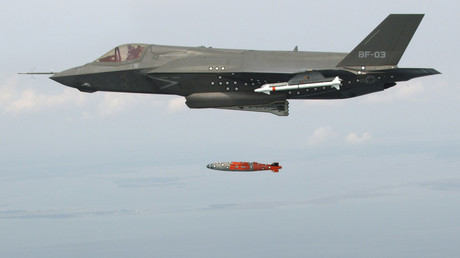 Despite being introduced into service in 2015, the jets, which cost about $100 million each to manufacture had a readiness rate of 55 percent – which meant that almost half the planes were not capable of actually performing a mission, either due to maintenance, breakages, or design faults that made them unsafe.

READ MORE: US grounds its entire fleet of F-35 fighter jets in the wake of South Carolina crash

While a fuel tube problem has been potentially blamed for the non-fatal September 28 crash in South Carolina, previous issues have included inefficient weight distribution, low maneueverability, outdated software and communication devices, helmet vision failure, and cabin oxygen supply problems. Worst of all, is that many of the issues stem not from kinks or one-off problems to be ironed out, but fundamental flaws in the design, with the Pentagon saying that even new planes need to be modified to become effective.