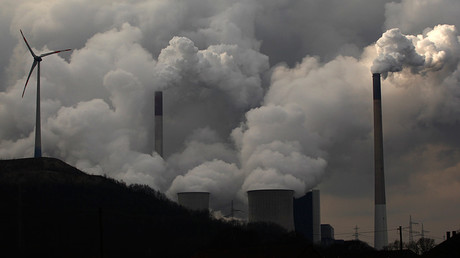 Breaking ranks with their own party, more than a dozen House Republicans have put forward legislation that calls for “economically viable” solutions to combat climate change.

The 17 lawmakers are calling on Congress to “study and address the causes and effects of measured changes to our global and regional climates, including mitigation efforts and efforts to balance human activities that have been found to have an impact.”

The proposal says that conservation of the environment should be considered a “conservative principle” and encourages Republicans to become “good stewards” to ensure the preservation of the nation for future generations.

Costello, a member of the House Energy and Commerce Committee, says that climate change should be a non-partisan issue, calling it a “priority for us all” in a press release.

While the bill does not explicitly state anything about green energy, it does call for “using our tradition of American ingenuity, innovation, and exceptionalism” to create solutions that address the causes and effects of climate change.

Stefanik, however, does specifically call for the use of green energy solutions, which she said are the “key to addressing the serious issue of climate change,” in a press release.

“This resolution brings together the priority of addressing the risks of climate change with the importance of protecting and creating American jobs. Innovation and clean energy are key to solving both,” she said.

The measure also acknowledges climate change is occurring, and that humans have been impacting the change. If unaddressed, the bill states, the effects could have “the potential to adversely impact all Americans.”

The impacts of climate change listed in the document include more frequent heat waves, more severe storms, worsening flood and drought cycles, water scarcity, and other significant weather events, all of which could affect productivity and saddle future generations with “costly economic and environmental burdens.”

Curbelo, co-chair of the Climate Solutions Caucus, said his state of Florida is “on the front lines of climate change,” according to a press release.

“South Florida residents are already beginning to feel the effects of climate change in their daily lives – from chronic flooding to coral bleaching to threats to our freshwater supply in the Everglades,” he said.

In the past, many Republicans have either denied climate change is happening, or they have argued that humans are not causing it.

President Donald Trump has called climate change a “hoax” and said that “global warming was created by and for the Chinese in order to make U.S. manufacturing non-competitive.”

NBC News just called it the great freeze – coldest weather in years. Is our country still spending money on the GLOBAL WARMING HOAX?

The concept of global warming was created by and for the Chinese in order to make U.S. manufacturing non-competitive.

Recently, the newly appointed head of the Environmental Protection Agency (EPA) Scott Pruitt said carbon dioxide is not “a primary contributor to the global warming,” a statement that his own agency denies.

Curbelo said that Pruitt’s comments were “disconcerting” and “akin to saying the earth is flat in 2017.”

A similar resolution was introduced by 17 Republicans in 2015 and several of them lost their seats during the last election.